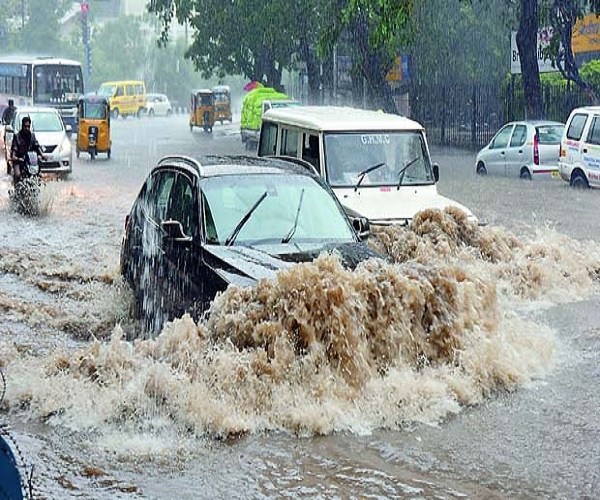 Every year, as the monsoon sets over Hyderabad, the same situation plays out – waterlogging and complete inundation of roads followed by long traffic jams, some which may even result in commuters taking three hours to travel 3 km. The civic authorities play blame game during hue and cry and then keep quite.

This year seems no different, as officials who said that they were prepared to handle the rains, seem to have overlooked many areas, especially in the city’s IT sector; commonly known as Cyberabad.

The waterlogging as a result of the rain is so severe, that the traffic police have issued advisories on alternate routes to take, recommending that commuters avoid several arterial roads in the city.

So, what are the causes of Hyderabad’s waterlogging woes and who is to blame?

Civic agencies indulge in a blame game
State agencies carrying out developmental works in the city are as much culpable for the heavy water logging on certain road stretches, as private developers resorting to haphazard layouts blocking the rainwater contours.

The problem has been compounded ever since the city’s road stretches were divided between GHMC and Hyderabad Road Development Corporation Limited (HRDCL), ostensibly for the sake of better road infrastructure.

A case in point is the footpath near the TCS campus in Gachibowli, which had to be cut through, barely months after construction, as it was obstructing water bail-out during the recent rain.

The well-manicured, wide pavement adorning a stretch of the Old Mumbai Highway in Gachibowli has been cut, as an emergency measure to let the stagnant rain water reach the drain on the other side.

Pavement damaged
Starting near the traffic police station and running parallel a little away from the boundary wall of the TCS campus, the pavement has been damaged at least in two places. The hurried manner in which the pavement has been cut has raised questions on whether prior planning to identify and make provision for the existing channels could have helped.

On the other side of the road too, the pavement running from the boundary wall of IIIT Hyderabad all the way till Gachibowli stadium, has suffered damage on account of work related to telecom cables and resitement of bus stops.

Prior to construction of the pavement, undertaken ahead of the Assembly elections last year, there used to be outlet in IIIT-H boundary wall ostensibly serving as a channel to drain rainwater. It has since gone underground.

The ongoing road widening works on the stretch too are raising many eyebrows, as stagnant water could wipe out the freshly laid BT within no time. The works should have been finished before monsoon or taken up later, residents feel.

Passing the buck
GHMC officials, when questioned, immediately point fingers at HRDCL, to whom the road stretch was handed over. The pavement too was built by HRDCL, without paying much heed to the issue of rainwater evacuation. No vents were made into the footpath for the water to reach the other side.

“At most locations where water bail-out problems occurred, developmental works by various agencies proved to be the reason, be it HRDCL or HMRL or our own SRDP contractors. Engineers from these agencies are not involved with routine maintenance issues, hence are not familiar with the terrain or drain network,” a senior official from GHMC said.

At one location in Madhapur, the median constructed by HMRL had to be broken to release the stagnant rain water. This is not the first time the median was broken, as such measures had been taken earlier too during monsoon.

Besides, construction silt and debris from SRDP locations entered the drains along with plastic waste, thereby choking them, the official said.

Rapid urbanisation
One of the main issues according to urban planners and activists is rapid urbanisation in the city, especially in the IT corridor, where an area that was once dotted with towering rocks and large lakes, have been flattened to give way to skyscrapers and high-rises.

This negligence by successive governments, without considering the topography of the area, is one of the main reasons, say activists.

In May this year, Forum for Good Governance wrote to Governor ESL Narasimhan, over the rampant illegal constructions in the last decade in Hyderabad and Secunderabad.

Speaking to #KhabarLive, FGG Secretary M Padmanabha Reddy said, “By GHMC’s own admission, there are at least 1.2 lakh illegal constructions in the city. This is due to a combination of factors; the greediness of citizens, the corrupt attitude of municipal officials and apathetic politicians.”

The activist, who retired as a senior bureaucrat, also blames faulty planning for the flooding in the IT corridor.

Taking the example of constant inundation that the road outside Shilparamam near the city’s Cyber Towers sees, he says, “The planning itself was faulty. The government knew that several lakh employees would travel every day to the area, but still proper planning was not done.”

“The Cyber Towers flyover and the T junction are located higher, while the area outside Shilparamam is lower. There used to be a natural stream that used to flow into a small lake nearby, which has now been blocked. As a result, the water piles up,” he adds.

The Cyberabad Traffic Police have also acknowledged the issue. In a press note earlier this week, authorities said, “Approximately, half an hour of waterlogging at Shilparamam would lead to congestion at Kothaguda, Botanical gardens and Gachibowli for almost 2 to 3 hours. It would take 2 to 3 hours of hard work by traffic police in regulating and normalising the traffic.”

Arguing that a ‘permanent solution’ is required, Dr LH Rao, a Hyderabad-based civil engineer, says, “The desilting needs to be done sincerely. With constructions coming up everywhere and road widening also in progress at various places in the city, there is an increased flow of surface runoff, which needs to be addressed.”

“Another issue is that stormwater drains are dysfunctional. Though they have built a network of drains, there is no proper inlet into the canal. The entry often gets covered up and as a result, water is not going inside. Instead it flows into sewer lines and this is why sewage overflows onto the street,” he adds.

Rao also points out that the entire length of the stormwater drain must be checked ahead of the monsoon, as structures also encroach on the drains and block the flow of water.

Another major issue, that even the GHMC admits to, is construction debris. It is a common sight to stack up sand, cement and bricks outside an upcoming structure. All this, gets swept into the drains and adds to the silt, when the city witnesses showers.

“It’s an effort that should span across the whole year and not just a few months before and during monsoon. Though the authorities are aware of it, they are not acting enough. Instead, they just panic and break dividers when it rains to drain out the water. Repairing the damage they do, is only additional cost on the state exchequer,” Rao adds.

Meanwhile, the GHMC has issued a list of 123 points in the city where major waterlogging is taking place. 495 monsoon teams have also been deployed on the streets of the city to ensure smooth flow of traffic and water pumps have been arranged to drain out water in case of stagnation. #KhabarLive