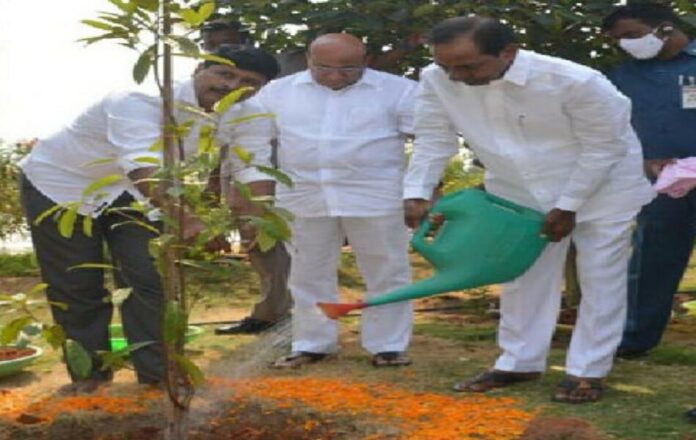 The ‘one crore sapling planted in one hour’ project does not envisage prior preparation and post-plantation maintenance, and is likely to become a programme of appeasement. 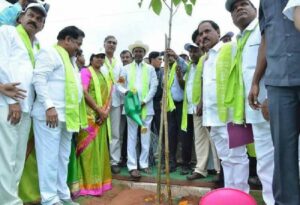 On the occasion of Telangana Chief Minister K Chandrashekhar Rao’s birthday, a huge event is being undertaken in the state. At least 1 crore saplings will be planted across the state in one hour. Each panchayat has been given a target of planting 1,000 saplings from 10 to 11 am. A siren would be sounded to mark the event.

With the declaration of the objective, this is likely to become a programme of appeasement and sycophancy. True benefit of tree plantation is unlikely because of various reasons. As this is more of a political programme, actual commitment may not translate into qualitatively better planting. Tree plantation is not merely restricted to digging a pit, shoving a sapling in it and watering it after filling the pit back. This ‘one crore, one hour’ programme does not envisage prior preparation and post-plantation maintenance.

A circular has been issued to all village panchayats to plant at least 1,000 saplings within the stipulated hour. However, nurseries have been prepared to supply 1 crore saplings, which in turn need to be distributed across Telangana to all villages. After including a minimum cost of Rs 20 per sapling, with other costs of digging the pit, watering and other arrangements, the event itself is likely to cost at least Rs 50 per sapling totalling to a whopping Rs 50 crore. Without such investment, this ‘one crore, one hour’ plantation programme may not succeed. In fact, more funds are required to ensure water supply to the tender saplings through the summer. As it is, many villages are facing water shortages. Even if there is water, creating infrastructure to supply water to these plants would entail additional expenditure.

Further, given the varied soil strata in Telangana, such haphazard plantation is likely to fail. In February with conditions of summer setting in, harsh sun can be a deterrent for the growth of the saplings unless adequate care is taken. Most villages already have had experience with the state’s Haritha Haram programme in the last 4 years. Green cover is limited to a few pockets, while a majority of the villages are yet to reach a substantial level of tree cover.

Food and Agriculture Organization (FAO) says it is best to plant tree species that are suitable to the climatic and soil conditions of the site. Seedlings and saplings need to be chosen carefully, after assessing the depth and nature of the soil. Often, shrub planting may be a better option whenever conditions are extremely adverse for tree growth. Additionally, care by local guardians can also make a difference. With an ‘imposed’ programme, priority for these local factors is likely to be low, if not absent completely. Ownership in such programmes is also low and as such may not translate into care, after the saplings are planted. 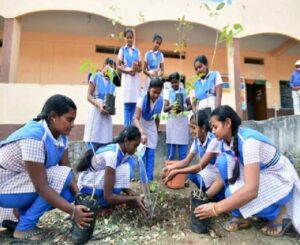 In the preparatory phase, the participation of local people is essential. It is likely to enhance the chances of survival, despite harsh conditions. However, this should be preceded by education and awareness programmes. An event planned at the top level with a specific purpose and shorter timelines becomes diluted in intensity. The original purpose also gets easily dissipated. Ultimately, it gets reduced to a ‘one hour-10 selfie’ programme, apart from wastage of funds and natural resources. As a negative outcome, the impact of such events on people can be so deep that actual tree plantation becomes tougher.

Way back in 2015, the Telangana government envisioned a target of planting 230 crore seedlings. Progress has been pretty slow on this mammoth project. Various strategies have been worked out. However, the Haritha Haram programme is rooted to the rainy season, especially in July. Yet, this ‘one crore, one hour’ plantation programme ignored such a crucial stipulation. Choosing the appropriate season can make a difference to the survival of saplings.

The number of nurseries where saplings can be developed have never been sufficient, even for the main Haritha Haram programme. Every year, lakhs of rupees are spent in importing saplings from faraway places such as Kadiyam in Andhra Pradesh. Nurseries in Telangana do not have adequate stocks of saplings to respond to the call of this one crore-one hour programme. Most of the available seedlings and saplings belong to one or two species. There is no diversity. Local species, with fruit and other ecosystem values, are not available for plantation.

In the past, under the caption ‘Mana Vooru, Mana Pranalika’, potential sites for planting were enlisted in each village. However, the circular for the one crore-one hour programme does not have reference to such sites. This circular does not even refer to the district plans prepared under Haritha Haram.

Tree plantation in Telangana has become a programme for political mileage. With sarpanches made responsible for plant protection, under an amended Panchayat Raj Act, this programme has further become a top-down imposed governmental activity.

Public funds are being spent on programmes organised with much fanfare. Each event has become an exercise of image-building. Understanding this, a Member of Parliament has usurped the Green Challenge programme, initiated under Haritha Haram, as his own initiative. As an extension of this, in the name of celebrating the CM’s birthday ‘one crore, one hour’ plantation programme was announced.

More funds and person-hours have been spent on the propaganda than on preparations for this unseasonal tree plantation programme. It is expected that this programme will enable growth of political images, even while there is a question mark on the growth of trees.

This programme lacks conviction and commitment. Rather, it has become a compulsion for village sarpanches and other personnel who are thirsting for public fund release for various developmental programmes. If private funds or party funds are used, one would not have objections. However, scarce public funds and government human resources are being used to gain some political brownie points.

The formula of building political image using public funds seems to have become a norm in Telangana. Bathukamma, a festival of the masses, was organised solely to help the image of the CM’s daughter, by liberal use of public funds and other resources. #KhabarLive #hydnews