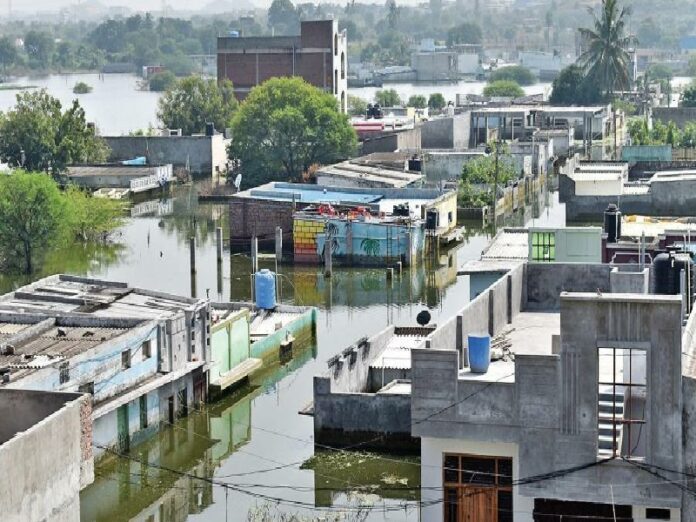 Despite being more than a month after the Hyderabad floods, Osman Nagar residents struggle as the place continues to remain inundated, normalcy is returning to many rain-affected localities in the city, the travails of heavy rains continue to haunt citizens of low-lying Osman Nagar in Shaheen Nagar, on the outskirts of the old city in Hyderabad.

Around 1.5 kms away from the inundated areas of Osman Nagar, a burqa-clad woman was walking with her three children. When asked about the route to Osman Nagar, Kauser Akthar and the boys said that they were heading towards the same area, where a group was serving lunch for those affected by the Hyderabad floods. Every day, either once or twice, the family walks to Osman Nagar to have a meal and then they return to their rented house, 2 kms away.

Until a month ago, Kauser and her family stayed in a house at Osman Nagar and paid Rs 3000 in rent for a small two room house. On October 14, when it rained heavily, the entire area got inundated in the floods that followed. Since then, residents of the 450-odd houses in the locality have either moved in with their relatives or have rented houses away from Osman Nagar. While some managed to carry their belongings to safety, several people lost all that they had saved over several years. While almost all locations across Hyderabad have recovered and began life afresh after the floods that wreaked havoc on the city, around 800 families in Osman Nagar continue to struggle as their locality remains under water.

Kauser leads the way to the inundated Osman Nagar. She stops at 32-year-old Kaneez Fathima’s house. Kaneez used to run a makeshift beauty parlour in one part of her house. Ever since the floods, she shut the parlour and she now identifies herself as a social worker. Speaking to #KhabarLive, she pulls out a carton full of documents. Each bundle of documents inside the carton has details of the residents of each house, their aadhaar card’s copy and a photo of the house under water. She has taken it upon herself to ensure help reaches those who are affected.

Osman Nagar seems like a ghost colony. There is an eerie silence all around and the only sound you can hear is that of a motor pump, arranged by a charitable organisation, to pump out water from the locality. The water is green with algae and a strong stech has filled the entire area. If one manages to climb up any one of the two-storey houses, a shocking sight unfolds as a very large area continues to remain underwater.

Most people living in this area are from the lower strata of society. The men in the house either work as auto drivers or as daily wage labourers. “We earn around Rs 8000 to Rs 10,000 a month, we already struggle to make ends meet. This flood has only made things worse for us”, explained Kaneez.

Mohd Amjad, is one of the few who own a two-storey house in the locality. He works in a company that sells and buys used cars. Fortunately, the water levels did not reach until the lane in which his house is located. “That night we packed our valuables and belongings and we waited with bated breath. We had decided that we would move out in case the water levels continued to rise,” he narrated.

A little distance away, a burqa-clad woman is seen walking towards the inundated locality. She moved in quick strides and was identified as Farzana Begum. Since the flood, she has dropped by the colony each day, to check if the water levels had receded, and each day, she has returned home dejected. This has been the story for several weeks now. She pointed at where her house stood. Most of these residents who lived in their own home have had to rent another place for the time being. The additional amount that they are having to shell out has burnt a hole in their pockets.

Sayeed Saairi, who is the President of Madina Masjid has been the one coordinating all the relief work and the help coming in. Armed with satellite images and topographic maps which he managed to source to make people understand the entire issue, he said, “Most people are under the impression that Osman Nagar is flooded because a lake nearby overflowed. But the issue is that the outlets of the lake are closed by people from adjoining colonies. To address this issue, the gates that let water into Firangi Nala should be opened immediately.”

The residents of Osman Nagar are infuriated and at a loss of words. While they have accepted nature’s fury, they are unable to come to terms with the way the government has handled the crisis in their locality. Most people in this area, which is clearly one of the worst-affected, say that they have not received Rs 10,000, which is the flood-relief announced by the government.

Osman Nagar comes under the jurisdiction of Sabitha Indira Reddy, the Education Minister, who is the elected legislator of this constituency. While political parties and candidates are campaigning and highlighting development works and making promises for the upcoming Greater Hyderabad Municipal Corporation (GHMC) elections, the people of Osman Nagar feel they have been left to their fate because the area doesn’t fall under the civic body’s jurisdiction.

“If this area would have been in GHMC limits, with the upcoming elections, they would have found a solution to the crisis. Today, we have been left to fend for ourselves. I wonder if Sabitha Reddy will ever get any vote from here,” said Saayed Saairi. #KhabarLive #hydnews