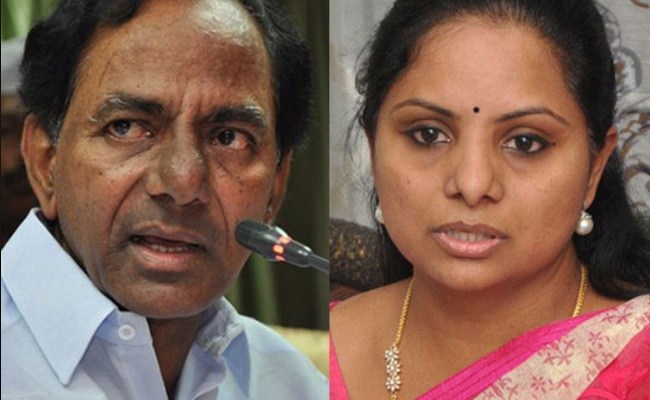 It’s exactly a week since the results of Lok Sabha results were announced and TRS chief, Telangana CM KCR’s daughter Kavitha suffered a humiliating defeat at the hands of BJP in Nizamabad Lok Sabha seat.

But the consequences of Kavitha’s defeat continues to haunt KCR’s family.

The grapevine is that Kavitha’s defeat has led to bitter infighting in KCR’s family.

KCR’s house aka Pragathi Bhavan is learnt to be witnessing shocking developments since then.

Kavitha is reportedly angry at his father KCR for sidelining Harish Rao in Lok Sabha polls.

Kavitha feels that if Harish was assigned the responsibility of Nizamabad Lok Sabha seat, she could have won easily.

After Kavitha lost in Nizamabad, she reportedly headed straight to her house in Hitech city area without coming to Pragathi Bhavan to meet her father KCR.

Upon knowing this, KCR reportedly rushed his wife, Kavitha’s mother Shobha to her house to console her.

When Shobha was at Kavitha’s house, Harish also rushed to her house from Siddipet, to console her.

Seeing Harish, Kavitha reportedly wept and told her mom that her defeat was because of KCR ignoring her brother-in-law (Harish) in Nizambad Lok Sabha polls.

ALSO READ:  What Went Wrong With Prof. Kodandaram As He Wants To Quit 'PrajaKutami' In The Sake Of Telangana?

She said her father assigned the task to her elder brother KTR, who did not focus on Nizamabad and instead spent most of the time campaigning in Hyderabad and surrounding districts.

She also complained about TRS MLAs in Nizamabad for not cooperating with her during campaigning despite she worked day and night for the victory of TRS candidates during December 2018 Assembly polls and ensured TRS made a clean sweep in Nizamabad district.

After pacifying for hours, her mother and Harish convinced her and took her to Pragathi Bhavan.

KCR reportedly offered to take both Harish and Kavitha into cabinet soon and promised Kavitha to nominate her as MLC.

But this was reportedly strongly opposed by KTR.

KTR is learnt to be against giving importance to Harish again and also opposed Kavitha’s nomination as MLC.

From that day, a family feud is learnt to be brewing in KCR’s house making KCR and his family members restless. #KhabarLive