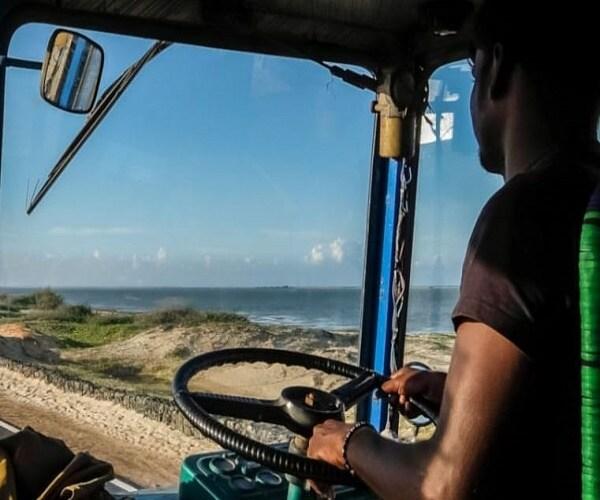 One of a experienced truck driver of Telangana – Akula Lingaiah, aged 45, has been driving a truck since 10 years, criss-crossing 16 states across India. Quite often, he drives for days without a break to earn a good bonus.

“My best record is driving non-stop for three days without any rest,” said Lingaiah, a resident of Rangareddy district in suburb of Hyderabad, readying for a 1,000-km haul till Becharaji in north Gujarat to Kaithal in northwestern Haryana when #KhabarLive spoke to him at his truck adda in Hyderabad. “We sleep only if we absolutely have to–usually around 2 a.m.–and wake up by 5 a.m.”

Lingaiah is among the nine million truckers and transporters who move freight across India’s critical inter- and intrastate traffic network. Trucks account for 69% of country-wide freight traffic in India, according to the Economic Survey 2018-19, and contribute about 3.06% to gross value addition.

But many truck drivers, like Lingaiah, are overworked. About a quarter of the truck drivers featured in a 2018 study conducted by lubricant manufacturer Castrol complained of sleep deprivation. Up to 53% reported physical and psychological issues such as fatigue, insomnia, obesity, backache, joint and neck pain, poor vision, breathlessness, stress and loneliness.

Punishing schedules and the poor health of drivers, according to experts, explain why trucks are involved so often in accidents. Trucks form the third highest group of vehicles to be involved in road mishaps (12.3%) and road-accident fatalities (15.8%), according to the Road Accidents in India report 2018 published by the Ministry of Road, Transport and Highways (MoRTH).

In developed countries such as Australia, truck drivers may drive for 12 hours at a stretch at the most and that too with half-hour breaks every five hours and at least six continuous hours of rest. Canada stipulates a 13-hour limit with a 15-minute break every two hours and eight continuous hours of rest, according to this 2018 study published by Danish public health institute, Sydvestjysk Sygehus. However, India has few regulations related to training, working hours or periodic vision tests for those driving commercial vehicles.

Of the 19 countries with available data, Japan reports the highest estimated monetary loss due to road traffic crashes–nearly $64 billion–followed by India at approximately $58 billion, according to this United Nations Economic and Social Council (UNESCAP) 2018 study.

Statistics shows about 26% decline in the number of deaths caused by trucks and nearly 15% decline in injuries over four years to 2018, according to data from the National Crime Records Bureau. (These figures differ slightly from the data in the MoRTH report.) However, the number of truck drivers who died during an accident they allegedly caused has increased by 33% and those injured by 17%.

“Truck drivers are vilified as bad drivers,” said Rajat Ubhaykar, author of the book Truck De India: A Hitchhiker’s Guide to Hindustan, a travelogue based on truck journeys. “When you sit up high there, you realise that everyone in smaller cars drives like crazy. A truck’s speed rarely goes beyond 50-60 km per hour as most of them are overloaded and there are blind spots–the driver’s left side, for example.”

The reason why most truckers experience bad health is because they have no choice but to work long hours and cover long distances to feed their families, said Jatin Tiwari, the national manager of Sight Savers India, a Mumbai-based non-governmental organisation focussed on avoidable blindness that has also conducted a survey on vision problems among truckers.

“Their income–between Rs 21,000 and Rs 24,000 per month–has not kept pace with India’s economic growth,” he said. “Upto 95% of the trucking business is not linked to any fleet-owning company and when such a large population is unorganised, it does need access to healthcare.”

Truckers leave home at a very young age to work as cleaners and learn the ropes, said Tiwari. “It is a community that is so surprisingly marginalised at so many levels,” he said. “It is not below the poverty line but on every socio-economic level, they perform just as badly.”

#KhabarLive spoke to truck drivers and experts on why truck-driving is so lethal and found the following factors most responsible: overloading; long hours of work and sleep deprivation; and poor health, especially vision issues.

Biggest factor: Overloading
Overloaded vehicles accounted for 10% of total accidents, 12% of fatalities and 27% of injuries, as per the 2018 MoRTH report. However, the number of accidents and deaths caused by overloading registered a decline in 2018 compared to 2017.

Overloaded trucks cause accidents for multiple reasons: tyre burst, worn brakes, road collapse, loss of balance, and speed while negotiating inclines, as per the report.

Similarly, partially loaded tanker trucks carrying liquids that slosh back and forth upset the natural centre of gravity of the truck. “Overloading impedes the ability of the truck’s ability to brake,” said Ubhaykar.

“Overloading is one issue where everyone makes money–the road transport office, the consignment office and the truck owners,” said Ubhaykar. “So to curb overloading, you need to hold all three parties accountable along with the driver. Moreover, the penalty that is imposed has to be more than the profit made by overloading; otherwise, this will not stop.”

‘We lose Rs 200 for every hour of delay’
The tendency to speed and overwork is linked to incentives, truckers told #KhabarLive. “We have to drive continuously because we get an incentive to reach on time,” said Ejaz Ahmed, a driver from Hyderabad. “For example a courier delivery will want us to deliver in 65 hours. If the truck reaches on time you get a bonus of Rs 1,000-Rs 2,000 but if you are more than two hours late, they cut Rs 200 per hour of delay.”

In April 2018, Castrol India conducted a month-long survey (cited above) involving 1,000 truck drivers from Hyderabad, Delhi, Chennai, Mumbai and Kolkata. About half (48%) of those interviewed reported doing an average of over 12 trips a month, and more than half of these lasted over 12 hours.

About 63% of drivers said they drive for more than eight hours a day, according to the survey. While 56% of drivers took one or two short breaks, 78% one or two long breaks. About 5% of truck drivers carried on without any break and 6% without long breaks, the survey found.

“Drivers keep driving for long stretches of time which causes fatigue that impacts their capability to control the steering,” said Verma of IISc. “This also happens due to lack of amenities for truck drivers. We don’t have the concept of a terminal where there are facilities for them to rest. This aggravates their fatigue.”

“We have designated places, mostly dhabas, where we take a break,” said Ahmed. “You cannot just stop the truck at the side of the road.”

About a quarter of the drivers (23%) reported sleep deprivation. Most drivers coped with long hours by listening to music (49%), while 14% opt for a regular walk/jog.

93% have vision problems
Sight Savers India had conducted a study titled ‘Eye OK Please’ in 2017. Its aim was to understand refractive errors in vision that cause blurring and spectacle usage among truckers and transporters.

A majority–93.2%–of the respondents felt the need to attend the 235 eye camps hosted by Sight Savers in 10 major Indian cities. Of these, 42.2% reported problems while driving, reading addresses while on the move and judging heights and distances.

Of the 137 respondents in the sight survey with problematic vision, 70% reported itching, followed by watery eyes (64%), difficulty in seeing distant objects (63%), and headaches (61%). The other major issues reported were difficulty in reading (37%) and redness in the eyes (20%).

There are three tests that should be conducted for a driver’s exam: the peripheral vision test, cone of vision test and colour test, as per Verma.

“Those without a normal cone of vision are said to have tunnel vision and in a driver this is dangerous because it prevents him from anticipating an obstruction, a hazard sign or even a pothole,” he said. “Drivers also need to be good judges of oncoming traffic, especially when they try to overtake. They also need a balanced vision to judge pedestrian behaviour on the road.”

Upto 64% of the respondents did not do anything about their problems. Sight Savers gave spectacles free to 7,605 truck drivers with uncorrected refractive errors but a follow-up survey found that 39% stopped using them. “Drivers usually do not want to be seen wearing spectacles as this affects their earning capacity,” said Tiwari.

Driving at night, exposed to high beam headlights and all kinds of climatic conditions tends to damage the vision of truck drivers, said Tiwari.

“While driving, hand-eye coordination matters; so if 50% of truck drivers have vision issues, it is clearly an emergency we haven’t paid any attention to,” he added.

Health is low-priority
Given long hours on the road, access to healthcare is an issue, complained truck drivers. In 2016, Akula Lingaiah had injured his back when he fell off the truck while removing a tarpaulin cover. It took him nearly 30 minutes to get to a government hospital and another 30 minutes to get medical help. The injury left him incapable of driving for a month and even today he finds it hard to lift heavy weights.

“I do not go to a doctor, just carry a few essential medicines with me,” he said. “I don’t have the time for a medical exam.”

Truck drivers are so resigned to their itinerant lifestyle that they ignore its impact on their bodies, said Ubhaykar, who interacted closely with truck drivers while researching for his book.

Health does not feature amongst the top three priorities for 63% of truck drivers, as per the Castrol study. Upto 68% of truck drivers featured in the study said they felt totally fit. But 53%, as we said, complained of problems such as fatigue, sleeplessness, obesity, backache, joint and neck pain, problematic sight, breathlessness/breathing issues, stress and loneliness. Upto 23% reporting battling lack of sleep, about 18% face physical stress and 12% face mental stress.

Upto 67% of the truck drivers surveyed said they visited doctors only in distress; more than a third (36%) do not have life insurance, with 32% claiming they have no need for it. #KhabarLive