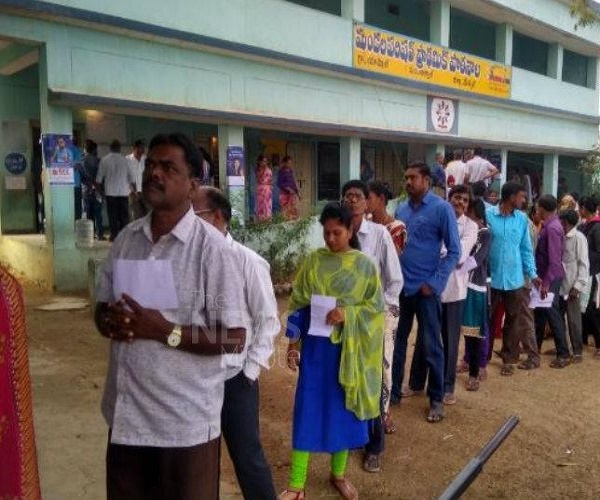 Despite a massive campaign organised by the election commission to ensure that people get out and vote in Telangana’s December 7 polls, the voter turnout in Hyderabad, this year too, fell to a dismal figure of 48.89% compared to 53% in 2014 and 58% in 2009.

The figure is the lowest ever since elections were held after Hyderabad was liberated from the Nizams in 1949. Charminar recorded the least turnout in Hyderabad, with just over 40% in the Old City.

Rangareddy district, supposedly home to the most educated population in the state, saw a voter turnout of 61.29%. According to poll analysts, the voting, that was held on a Friday, paved way for a long weekend and most urban folks left the city for their villages. Apart from this, factors like Jumma and malfunctioning EVMs, and most importantly, the deletion of names from electoral rolls, left many in the cities angry and upset.

Though the awareness among people to cast their votes has increased, there are many reasons people in urban areas of the state are still held back, experts say.

According to Raghavendra Reddy, a political analyst, it’s the electoral process in the state that needs to improve and become more accommodating, owing to the lifestyle of the people in the cities.

ALSO READ:  Khajaguda, The Land Of Preachers In Hyderabad

“People do not have the patience to roam around and identify where their votes have been registered. Giving holidays doesn’t mandate that one is obligated to vote. The time taken to cast one’s vote has to go down. People this time, who went to cast their votes at 7 in the morning, couldn’t come out of the polling booths even after 10 am, owing to discrepancies in the EVMs. The technicalities, from correcting the electoral rolls to simplifying the voting process, will encourage a lot of urban voters to come out and vote,” Reddy says.

Ravi Telakapalli, a social commentator, says that people living in urban cities have less political connect with their leaders than the rural populace.

“Urban population is more community bound than the people in villages. Leaders in rural areas cannot escape the public gaze. Their lives are closely linked with the government welfare schemes, which means they need to have a stronger political connect than the people in cities, to gain from the schemes. Feudal ownership in villages is also dependent on political affiliation, especially when it comes to agriculture-based professions. Contrary to public perception, political consciousness is more in rural areas. Like Mahatma Gandhi said, India still lives in its villages,” Ravi says.

Agreeing with Ravi’s claims, Raghavendra says that people living in cities are less politically inclined, as majority of their professions do not directly derive benefits, irrespective of the government in power.

“Leaders at the grassroots levels are more connected with the people, owing to a smaller geographical area. People, especially those working with the private sector in cities, rarely have anything to do with their political leader. Many of them do not believe in the political process at all. But in villages, from subsidies, insurance to welfare schemes, people are on a closer proximity with the government. In urban areas, compared to villages, there are lesser chances that people may know who even their MLA candidate is,” Raghavendra says.

Lagadapatti Rajagopal, ex-Congress MP, recently made a startling prediction against the incumbent TRS government and said that if the city sees a lesser turnout, there are high chances that the government will return to power. Backing the claim, Telakapalli Ravi says that political parties in cities resort to gimmicks to ensure that people in certain areas do not vote for the opposition party, thereby keeping the seat intact.

“For example, all political parties, including the Congress, TDP and BJP, gave a fiefdom to the AIMIM in the Old City. Parties have stopped challenging the communal forces in state. There have been threats and intimidation in places where TRS and AIMIM thought they would not win a seat. Therefore, it’s not surprising to see constituencies in the Old City having the least voter turnout in the entire state.”

According to experts, 2018 polls also saw maximum censuring from the election commission. “Leave aside ordinary citizens. From minister Etala Rajendran’s father to director Rajamouli’s wife, people were in for a rude shock when they couldn’t find their names on the electoral rolls. The election commission only pretended preparedness. If polls were to be held in November, as KCR had wished, the elections would have been an absolute mess. The hurriedness in conducting the polls also didn’t allow many young voters to register their first votes,” Ravi adds.

Though dual votes are not mandated by the election commission, according to Raghavendra, this anomaly is still a reason for the dismal voter turnout in the cities.

“Majority of people living in Hyderabad come from districts around the state. Many of them have dual votes, one in the city and the other in their villages. There is always an excitement to go to one’s native place and cast votes. So a lot of people from the cities travel to their villages, owing to an emotional connect, despite being enrolled in the city electoral list as well. The polling percentage will definitely go up if the electoral process is made more accurate and the anomaly is rectified,” Reddy opines.

Agreeing with the allegations of people having dual votes, GHMC West Zone commissioner Harichandana, says that one of the major reasons behind the lesser voter turnout was the long weekend that had people flocking to their villages. “Four days in a row was lucrative enough for people to visit their villages and also cast their votes there. Also, in Hyderabad, many of the voter IDs were not linked to Aadhaar, which led to a lot of voter IDs being deleted, following discrepancies in the electoral rolls which left many disgruntled,” she adds.

Ravi adds, “The current election has only shown the political indifference that people in cities owe, contrary to the belief of a better political conscious population among the educated. As long as people are not direct beneficiaries of government schemes, no amount of campaign can make people realise the value of their votes.” #KhabarLive