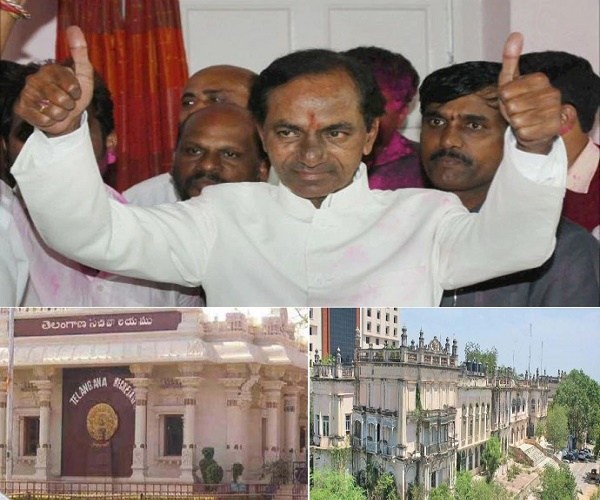 Telangana CM K Chandrasekhar Rao laid the foundation stone for a new Assembly-secretariat complex in accordance with Vaastu. Good luck to KCR even as his state faces huge difficulties.

Telangana Chief Minister K Chandrasekhar Rao laid the foundation stone for a new secretariat to be built — reportedly at a cost of Rs 400 crore — and the Assembly to come up at an estimated cost of Rs 100 crore at Erram Manzil in Hyderabad.

As KCR is a firm believer in Vaastu, government vaastu advisor Suddala Sudhakar Teja visited the secretariat and finalised the site. According to senior R&B officials, all the existing blocks would be razed for the new secretariat, which will have a built-up space of six lakh square ft.

KCR had announced that the new Assembly building will look like the Parliament complex, while its front elevation will resemble the present Assembly. “Two architects have submitted four designs for the secretariat and assembly. The chief minister has suggested some modifications,” said a senior official.

Largely, the designs submitted by prominent architect Hafeez Contractor were almost frozen — but KCR is entertaining new designs too.

Why a new secretariat?

According to senior journalists, at a press conference early on in his first stint, KCR reportedly said that “evvaru podugugaale” (nobody has done extremely well) functioning from this secretariat.

KCR had avoided visiting the old secretariat as he was told that the buildings suffered from “Vaastu dosha”. And the reason KCR is going for this Vaastu-compliant new structure is reportedly to ensure a smooth regime.

At one stage, rebutting criticism that the Chief Minister was not attending the office, KCR remarked that wherever he functioned from would be the Chief Minister’s office. Call it superstition or drawing a tenuous connection, KCR’s concern about the office has the following basis.

No chief minister serving from the old secretariat had apparently served full terms (a five-year term between two General Elections) — except YS Rajasekhara Reddy (from May 2004 to May 2009). All others were toppled midway or sought fresh elections, having the Assembly dissolved. Then, legendary leader YSR died in a helicopter crash in less than four months of taking oath as the Chief Minister for the second term in 2009. K Rosaiah and N Kiran Kumar Reddy who served as the chief ministers after YSR’s demise also did not serve full terms.

After the bifurcation of the state, the secretariat complex had to be shared with the Andhra Pradesh government, as the Centre allowed Hyderabad to be common capital for Telangana and AP for 10 years — in fact, a swanky office was made for N Chandrababu Naidu in the L Block of the Secretariat. However, soon after the cash for votes scam hit him, Naidu moved large parts of the government to Amaravathi.

But the AP government did not yield the buildings to Telangana State Government.

It’s only after YS Jaganmohan Reddy became the Chief Minister that the AP Government agreed to hand over the buildings in the Secretariat under its possession.

Now, the new secretariat would be built at the same place. And KCR has issued orders for the new Vaastu-compliant secretariat and the Assembly building to be built at an estimated cost of Rs 500 crore at Errum Manzil. This involves razing of two structures — the Errum Manzil, constructed in 1870, which was used to host royal banquets and the Saifabad Palace that was built in 1888 by the sixth Nizam of Hyderabad, Mahboob Ali Pasha, which is at the centre of the present Secretariat complex.

KCR is of course free to follow whatever he believes in — but the Vaastu will now have to work well and fast too.

Just a day before the new secretariat’s foundation was laid, Finance Minister Nirmala Sitharaman replied to a question by Congress Rajya Sabha member KVP Rama Chandra Rao that the Telangana state’s debt had increased by 159% ever since the state was bifurcated — from Rs 69,517 crore to Rs 1,80,239 crore.

Telangana ranked second in the list of farmers’ suicides in the country — with nearly 4,000 farmers giving up their lives due to agrarian distress since 2014.

Telangana has one of the highest unemployment rates, especially among the youth, say reports recently released by National Statistical Office (NSO) of the Ministry of Statistics and Programme Implementations (MOSPI). The unemployment rate in urban areas of Telangana is pegged at 12.4%.

Further, with Telangana reeling under an impending drought-like situation with acute water crisis owing to an alarming dip in groundwater levels across the state, does a Vaastu-compliant structure promise a ‘smooth regime’, dealing with rampant farmers’ suicides and other socio-economic problems?

If not though, will KCR ensure that he gives the Rs 500 crore money back to the treasury from his own pocket?

After all, it is the state’s money that is being used to serve his superstition — and the desire for a ‘smooth regime’.

One, we presume, without farmer suicides, unemployment or drought. #KhabarLive