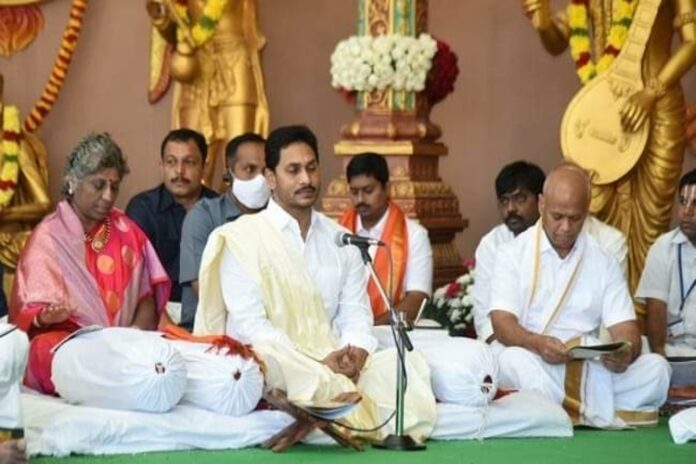 The recent incidents of attacks on temples, burning of chariots at Bitragunta and Antarvedi temples, breaking of idols of gods, theft of some silver images from Vijayawada Kanakadurga temples and the controversy over declaration of faith by non-Hindus have no doubt created some troubles for the Y S Jagan Mohan Reddy government.

The Hindu groups have attributed these incidents to a systematic attack on the Hinduism in the regime of Jagan, who is a Christian by faith.

The BJP leaders have been trying to cash in on the sentiments of Hindus, while the TDP leaders have seen it an opportunity to get closer to the saffron brigade.

ALSO READ:  #NewsImpact: Administration Has Gone For A 'Toss' In Telangana Secretariat, Deserted Look 'Without Cabinet' And Staff

Though such controversies make little impact on the electorate, Jagan is learn to have decided not to allow such criticism that projects him as anti-Hindu.

He knows that if he remains silent, these forces might step up the campaign systematically, damaging his image and political prospects in the long-run.

There have been suggestions to the chief minister from spiritual leaders like Sarada Peetham seer Swaroopanandendra Swamy and Temple Protection Movement founder M V Soundara Rajan that he should do something to appease the Hindus so that they would not lose faith in him.

ALSO READ:  Is Buying Gold In Hyderabad A Good Idea During 'Dhanteras' In Diwali?

One such advice is to set up a Dharmika Parishad comprising popular seers of various mutts to oversee the management of temples, instead of entrusting the task to bureaucrats in the name of Endowments Department.

This Dharmika Parishad will function on the lines of Wakf Board for Muslims and takes care of the protection of temples and their properties. This will liberate the temple from the clutches of the government.

“The Dharmika Parishad will administer the Hindu Temples and Endowment institutions be constituted at the earliest. It will silence all the unnecessary criticism and all the mouths will be shut,” Soundara Rajan said.

However, it is easier said than done, because the government cannot hand over the temple properties to a trust comprising only seers. Without the bureaucratic help, it is not possible to administer temples.

“Jagan may consider his proposal to some extent, like entrusting the responsibility of conducting rituals to these seers. The administration of properties and infrastructure can still be under the control of the government,” sources said. #KhabarLive #hydnews