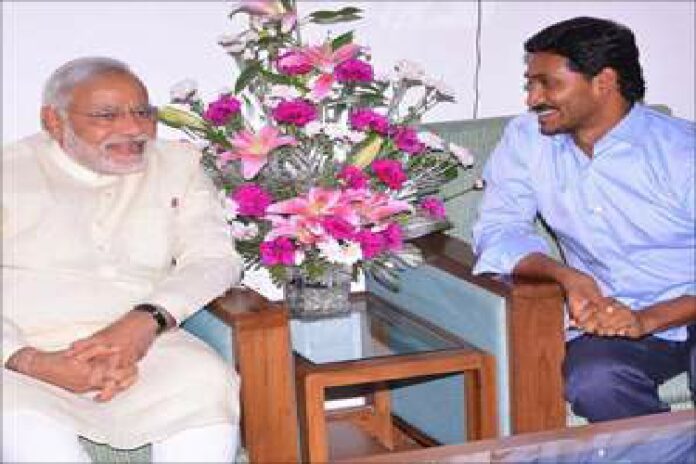 Now that there is a serious possibilities of YSRCP joining the NDA government at the Centre, one wonders whether YSRC would also reciprocate the gesture in the state with the BJP ministers in his cabinet?

In the past, when Telugu Desam Party had joined the NDA in 2014, then chief minister N Chandrababu Naidu offered two cabinet berths to the BJP, in lieu of two ministerial posts to the TDP in the Narendra Modi cabinet.

Accordingly, Sujana Chowdary and P Ashok Gajapathi Raju had become ministers in the Modi government. In the state, BJP leader P Manikyala Rao and Kamineni Srinivas were inducted into the Chandrababu Naidu cabinet.

Now, the question is whether the same arrangement will happen now. There are some reports that if two of YSRC MPs join the NDA government, Jagan will also be under obligation to accommodate two BJP leaders in the state cabinet.

But unfortunately, there are no MLAs for BJP in Andhra Pradesh. There are only three MLCs – Somu Veerraju, Vakati Narayana Reddy and P N V Madhav. Of them, Veerraju has tenure only up to May 2021 and the other two will complete their term in 2023.

So, if Jagan wants to give cabinet berths to the BJP, he may have to take two of these MLCs. Most probably, Veerraju and Madhav might be nominated by the BJP for the cabinet berths.

In order to accommodate these two BJP MLCs, Jagan has to sacrifice two of his ministers because he has a full-fledged cabinet in tune with the strength of the assembly. This will lead to rumbling within the YSRC, which is not good for Jagan.

Moreover, it might also send negative message among the people and might prove counterproductive to the YSRC in the next elections.

“So, in all probability, the BJP might not ask Jagan to give cabinet berths to its MLCs and even if it does, Jagan might express his inability,” sources said.

And there is a fundamental difference between TDP-BJP alliance and YSRC-NDA pact. In 2014, BJP had an electoral alliance with the TDP and both had seat sharing arrangement. So, Naidu had to follow this coalition dharma.

But YSRC won the elections independently and it is likely to join the NDA at the Centre at the request of the BJP leadership. So, Jagan has no obligation to accommodate BJP MLCs in the state cabinet! #KhabarLive #hydnews