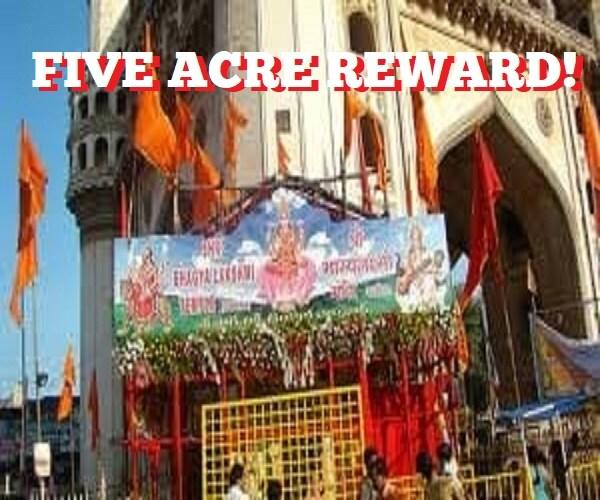 When Muhammed Quli Qutb Shah (1580-1611 CE), the fifth sultan of the Qutb Shahi dynasty of Golconda, laid the foundation of its iconic Charminar to symbolise the founding of Hyderabad. Hyderabad was intended as a citadel of Muslim power in the Deccan. Qutb Shah was an accomplished poet and wrote his poetry in Persian, Telugu and Urdu. His famous ghazal “piya baaj pyaala piya jaye na, piya baaj ek din jiya jaye na” is still a favorite in soirees today.

In 1589 CE Muhammed Quli Qutb Shah married a Hindu woman, Bhagmati, reputed to be a courtesan and who remained with him as his Queen till his death in 1611 CE. The sultan bestowed the title of Hyder Mahal on Bhagmati and hence the name of the new city came to be Hyderabad. The contemporary Mughal poet Faizi wrote to Akbar that the place commemorates “a hardened whore”.

There is a sectarian conflict brewing out of a plan to expand the Bhagyalaxmi Temple growing out of the southeastern corner of Hyderabad’s iconic Charminar. One must relate the name of this temple to the demand in certain rabid RSS sections to rename the city as Bhagyanagar. A BJP MLA, Raja Singh, from the nearby Hindu dominated constituency of Maharajganj, has been quite shrill about this. Given Bhagmati’s questionable antecedents, the types of Raja Singh need a better genealogy for Bhagyanagar.

I have been visiting the Charminar since I was a child and have also seen the small stone with vermillion applied to it grow from a passer-bys whim to a small shrine and now a full blown temple. The present governor, a RSS appointee, even visited the temple to offer prayers further sanctifying its illegality. It has grown right under the nose of the Charminar Police Station.

Over the years I have been asking various people in authority to demolish it. Neither the police, nor any Chief Minister or even the Majlis (MIM) leadership care about it. Now the builders of the temple are claiming that it was the Charminar that came around it. This is a travesty and an outright lie. This temple must be removed and the Charminar restored to its original conception. The two then and now photos tell the truth.

According to Jean de Thévenot, a French traveller of the 17th century whose narration was complemented with the available Persian texts, the Charminar was constructed in the year 1591 CE, to commemorate the beginning of the second Islamic millennium year (1000 AH). The event was celebrated far and wide in the Islamic world, thus Qutb Shah founded the city of Hyderabad to celebrate the event and commemorate it with the construction of this building. Due to its architecture it is also called as Arc de Triomphe of the east.

Contrary to a widely held misconception the monument has no religious overtones. It has never been used as a mosque. To my knowledge it is a rare instance of secular Islamic architecture in India. The Archaeological Survey of India (ASI), the current caretaker of the structure, mentions in its records, “There are various theories regarding the purpose for which Charminar was constructed. However, it is widely accepted that Charminar was built at the center of the city, to commemorate the eradication of Cholera”, a deadly disease which was wide spread at that time.

True, there is a mosque on the fifth deck. But this only reflects the socio-political reality of the era. Even the Taj Mahal, a maqbara, has a mosque.

About the temple named Bhagyalakshmi Temple that is now located at the southwest base of Charminar, The Archaeological Survey of India (ASI) which manages the Charminar, has in no uncertain terms declared the temple structure as an unauthorised construction. Hyderabad High Court has stopped any further expansion of the temple. While the origin of the temple is currently disputed, the current structure that houses the idol was erected in the 1990s.

Several magazines and newspapers have published old photographs showing that the temple never existed. A temple became visible in Charminar photos only after 1990.

I wonder how the courts will view the desecration of the Charminar. Maybe they will give the people of Hyderabad five acres of land elsewhere to build a new Charminar? #KhabarLive