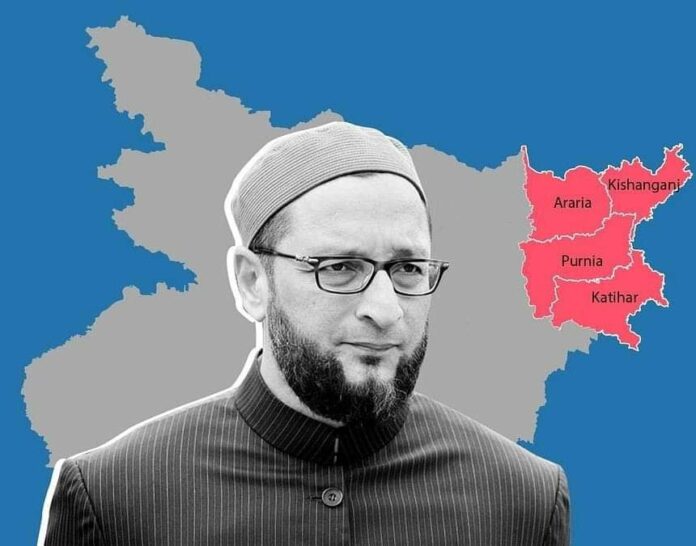 The Congress has spared no efforts to target the AIMIM in the last leg of the campaign in Bihar’s Seemanchal region.

Mastan, a six-time MLA from Amour, had said this in the presence of former Congress President Rahul Gandhi.

The AIMIM, on its part, has accused Mastan and his supporters of being behind the recent attack on its convoy, in which several party workers were injured.

The AIMIM says that the Congress is rattled with its rise in Seemanchal, and hence the attacks.

The entire region of Seemanchal in Bihar, comprising the districts of Purnea, Katihar, Kishanganj and Araria, will be voting in the third and final phase of polling on 7 November.

There are two other instances which indicate that countering AIMIM is the Congress’ priority in this phase.

Barely a few days before polling, the Congress summoned Telangana leader Mohammad Ali Shabbir and made him the in-charge for the Seemanchal region. Clearly, the Congress wanted someone who is familiar with the AIMIM’s techniques in its home ground of Hyderabad.

On the last day of campaigning, Congress’ General Secretary in-charge for communications Randeep Singh Surjewala focused his entire statement on attacking the AIMIM.

Why is the Congress investing so much of energy in trying to counter the AIMIM?

The answer lies in Owaisi’s attacks.

Owaisi’s Attacks Focus on CAA, Babri Masjid & Neglect
Owaisi hit the campaign trail for the Bihar Assembly elections late due to the floods in his constituency Hyderabad but began drawing huge crowds, especially in Seemanchal.
Out of the 24 seats the AIMIM is contesting across Bihar, 19 are in the Seemanchal region.

Owaisi’s attacks cover a range of issues such as the neglect of Seemanchal, the Congress’ stand on Babri Masjid, and the silence of political parties on the Citizenship Amendment Act (CAA).

“Why did Kamal Nath celebrate the Ram Mandir Bhoomi Pujan and why did Priyanka Gandhi Vadra welcome it,” he asks on the Babri Masjid issue.
However, the loudest cheers are when he spoke on the CAA.

“Through the CAA-NRC-NPR, we will be asked to prove our citizenship. Does Modi want proof of our citizenship? Then come and see the graves of our ancestors here.”

Owaisi slammed Nitish Kumar for supporting the CAA and criticised the Congress and the RJD for remaining silent on the issue during the election campaign.

Bihar, along with Maharashtra, witnessed the maximum number of protests against the CAA. Owaisi says that the protests will revive.

“When the pandemic is over, we’ll be back on the streets to protest against this law, Inshallah,” he said at a rally this week.

On the neglect of Seemanchal, he said, “The literacy rate in Bihar is 52 percent, but here in Seemanchal, it is 35 percent. This shows how successive governments have done nothing here.”

However, the alliances are important in another respect. They are proof of the AIMIM’s growing importance in Bihar. In the 2015 polls, the AIMIM contested just six seats and was considered almost like a pariah.

The alliance with the RLSP and other parties may not electorally help the AIMIM, but it is proof that the party is no longer an outsider in state politics.

However, Owaisi continues his visits to Seemanchal, and his party expanded there under the leadership of Akhtarul Iman, a former MLA from Kochadhaman.

The turning point came in 2019 when the AIMIM’s Qamrul Hoda won the bypoll from the Kishanganj Assembly seat, defeating the BJP and relegating the Congress to third position. The seat was with the Congress, but it lost its deposit in the election.

However, in this election, it is Amour which symbolises the AIMIM’s expansion efforts.

By fielding its most prominent face, Akhtarul Iman against a strongman like Abdul Jalil Mastan, the AIMIM has taken a major risk. This has partly to do with the political vacuum in the region.

This region has historically been underrepresented in successive regimes in Bihar. For several years, the tallest leader from the region was Mohammad Taslimuddin, who was in the RJD for the most part but later fell out with Lalu Prasad.
Taslimuddin enjoyed clout across the region and has represented three different Lok Sabha seats from Seemanchal – Kishanganj, Purnea and Araria.

Currently, the two most prominent leaders among Surjapuris are AIMIM’s Akhtarul Iman and Congress’ Abdul Jalil Mastan, who are battling it out in Amour.

A year after Taslimuddin’s death, Maulana Asrarul Haque Qasmi, the then Congress MP from Kishanganj, also passed away. Though the Maulana didn’t have kind of clout Taslimuddin had, he was the most prominent leader from the Surjapuri community that holds considerable influence in the Seemanchal region.

After his death, the two most prominent Surjapuri leaders now are Congress’ Abdul Jalil Mastan and AIMIM’s Akhtarul Iman, and this adds to the importance of their battle in Amour.

It’s aspects like these that make the election in Seemanchal quite different from the contest in the rest of Bihar.

Why Seemanchal Is Different
Demography is a major factor. The Muslim population in Seemanchal is much higher than the rest of Bihar.

While the overall population of Hindus is lower in Seemanchal, there’s another difference – the Yadav community, which has a strong influence across Bihar, is hardly present in Seemanchal.

Linguistically too, though Seemanchal is considered part of the greater Mithila region, many people here speak Surjapuri, Kulhaiya and Bengali.

Muslims in Seemanchal are much more rural than in the rest of Bihar, and even within rural Muslims, the average landholdings by Seemanchal Muslims are smaller.

Broadly, political rivalries in Seemanchal are between three communities particular to this region: Surjapuris, Kulhaiyas and Shershahbadis.

Surjapuris: According to some scholars, Surjapuris are of Koch Rajbonshi origin. George Grierson in the Linguistic Survey of India described Surjapuris as belonging to the Koch origin, speaking a dialect similar to the Koch Bengali of Malda.

Shershahbadis are also of Bengali origin but have a different history. They are said to have been soldiers under Sher Shah Suri, settled initially in Gaur in Bengal. But after the Mughals took over, they were displaced and took to cultivation. They, later, came to adopt the Ahle Hadith school of thought, which also differentiates them from a majority of Muslims in Seemanchal.

Kulhaiya are said to have been originally from Hadhramaut in Arabia, worked as mercenaries with the Faujdars of Purnea, and intermarried with locals of different castes as well as with peasants who migrated here from North and West India. As a result, the Kulhaiya dialect is much more mixed due to the diverse influences.

Kulhaiya and Shershahbadis both have OBC status but Surjapuris don’t. Ansaris are also present in sizable numbers, but they are even more underrepresented politically.

In terms of political representation, Kulhaiya fared better, comparatively – Mohammad Taslimuddin was a Kulhaiya. Gradually, representation among Surjapuris also increased to some extent.

The caste dimension is crucial in the battle for Amour as well. The NDA hopes that the Surjapuri votes will get split between Congress’ Abdul Jalil Mastan and AIMIM’s Akhtarul Iman, while the JD(U) candidate Saba Zafar, a Kulhaiya, would consolidate Hindu votes besides the suppport from his own community.

However, this is easier said than done, as the Congress is actively trying to woo Hindu votes in the seats, while the AIMIM is said to be getting support from non-Surjapuri Muslims as well.

The support for AIMIM, at least in terms of crowds, is not just due to local factors. In some ways, it is also against the alleged invisibilisation of Muslims in the political battle in the state.

In the 2015 elections, there was even a whisper campaign, urging Muslims not to come out to vote in the first half of the day and not come out wearing visibly “Muslim attire” so as not to cause a consolidation of Hindu votes behind the BJP.

This fear of ‘Hindu consolidation’ has led to a great deal of invisibility of Muslims and issues concerning Muslims in the political discourse.

While, in terms of representation, the Mahagathbandhan has given tickets to a sizable number of Muslims, issues like the CAA and Hindutva violence have been almost missing from the elections.

Even the BJP’s dog whistle attacks on areas with a comparatively high concentration of Muslims went unanswered.

The reasons may have been tactical as Tejashwi Yadav may not have wanted to divert from his campaign’s focus on jobs. But this has opened up the Mahagathbandhan to attacks from Owaisi. #KhabarLive #hydnews