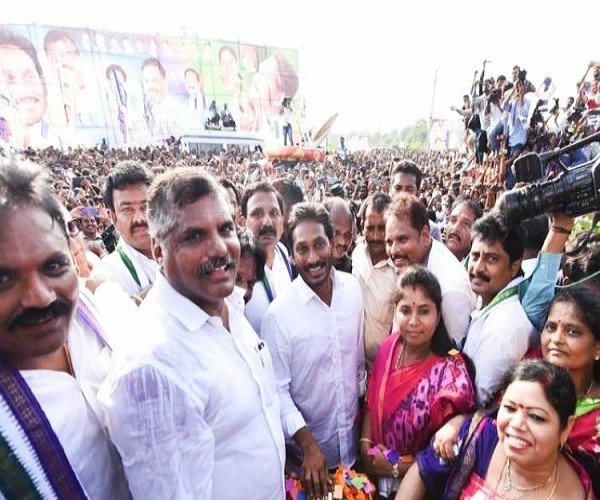 For the past 10 months, the leader of the opposition in Andhra Pradesh, Jagan Mohan Reddy has been leading a padayatra through the state against the ruling TDP. On Monday, the YSRCP Chief’s Praja Sankalpa Yatra crossed the 3,000-kilometre milestone at Kothavalasa in Vizianagaram district.

Jagan Mohan’s walkathon, launched with an aim of unseating sitting CM Chandrababu Naidu in the upcoming elections, has mounted an attack on the ruling TDP, cornering it over issues like farmers’ welfare, education, health and irrigation.

Halfway through his walkathon, the political atmosphere in the state changed. TDP severed ties with the ruling NDA over the Special Category status to Andra Pradesh. YSCRP’s MPs resigned, making the opposition party’s stand clear on the issue.

Though Jagan made headlines by challenging Naidu to make his MPs resign and fight for the issue, he was attacked by different political groups for skipping assembly sessions.

ALSO READ:  Why The Telugu States Are Untouched By Ayodhya Politics?

Jagan’s padayatra is two districts away from completion and continues to intrigue political onlookers on whether it will be a successful experiment for the leader.

The political history of Andhra Pradesh proves that Padayatras have never been a bad option, they have worked in favour of leaders like YS Rajashekar Reddy (in 2004) and a decade later, for Chandrababu in 2014.

Prof Dr Gundimeda Nagaraju, a social scientist at the University of Hyderabad, opined that Jagan Mohan Reddy has positioned himself as a leader through his walkathon.

“It appears that Jagan Mohan Reddy’s yatra has brought him positive mileage. Yatras are popular crowd pullers, but politics in Andhra Pradesh, going by the history, works with permutations of alliances with partners at the national level and as well as the regional level,” he stated.

He refers to Jagan’s debacle in 2014 following TDP’s alliance with BJP at the national level and Pawan Kalyan’s Jana Sena Party at a regional level.

It should be noted that earlier, several TDP leaders alleged that YSRCP and BJP are planning an alliance before the polls. Chief Minister Naidu too alleged the same.

Leaders of the YSRCP seem to be convinced that Jagan Mohan’s yatra will be a crowd puller that may translate into votes in the polls next year. YSRCP Secretary M Arun Kumar told TNM that the padayatra will work to the party’s advantage.

“When the Padayatra started, people broke their silence and began to question Chandrababu Naidu. They are hoping that Jagan will come to power and end the undemocratic rule of the TDP,” Kumar said.

Kumar dismissed rumours of a tie-up with the BJP.

“All that is yellow journalism. It was YSRCP who first moved the no-confidence motion against the BJP government and not the TDP. At the time of the no-confidence, they didn’t even support it. Jagan Mohan Reddy told it over a hundred times that we have not allied with anyone.”

As Prof Nagaraju pointed out, if YSRCP wants to dismiss rumours of an alliance, it has to make stronger assertions that it is not with the BJP.

Senior analyst Dr Pentapati Pullarao observed that the padayatra could be an added advantage to YSRCP, along with the anti-incumbency wave.

He said, “The scene for 2019 is turning into a triangular contest (TDP-YSRCP-Janasena) and there is anti-incumbency, given the time for elections (gap) it is early to conclude that if the same momentum will be continued”. #KhabarLive