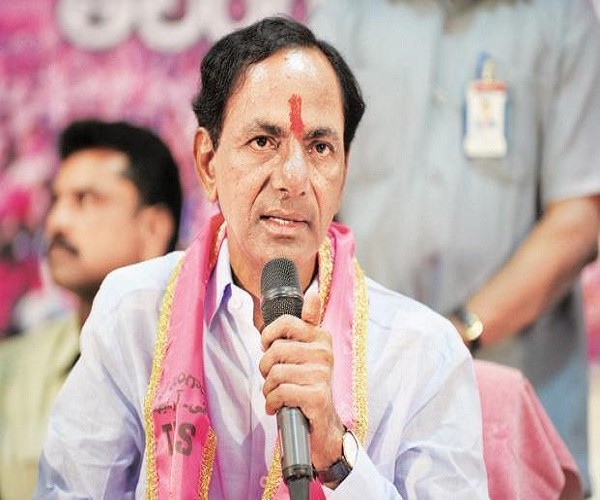 He claims the state is a role model for the country — for not only creating wealth, but also distributing it among the poor. Telanagana Rashtra Samiti (TRS) chief K Chandrasekhar Rao is pulling out all stops to woo every section of the society in his state.

After announcing that the ruling TRS will win 111 of the 119 seats in the Telangana Assembly elections, as assessed by an opinion poll which he ordered, KCR is offering a slew of incentives and making promises to improve his party’s poll prospects though the elections are scheduled only in May 2019.

Granting pensions to single women — Rs 1,000 a month — stood out among the slew of initiatives launched to mark the third anniversary of Telangana by CM K Chandrasekhara Rao. It is described as the first such in the country. The KCR Kit, comprising soaps for mother and child, baby oil, a cradle, a mosquito net, dresses, sarees, a handbag, towels, napkins, powder, shampoo, diapers and toys for the child, together costing Rs 2,000, is aimed at reducing maternal and infant mortality and promoting institutional deliveries at state-run hospitals.

More are on the cards. Another ambitious scheme is to grant 20 sheep and a ram to every family of Yadav and Golla Kuruma communities in the state, starting June 20. It entails the distribution of a staggering 84,00,000 sheep in two years, and an expenditure of Rs 5,000 crore.

Apart from sourcing stock from other states for distribution, officials are sowing grass seeds in 46 lakh acres, including forest lands, to ensure fodder aplenty and constituting 100 mobile-veterinary clinics.

They have also launched a toll-free number for medical aid for the sheep. To cheer up farmers, KCR has assured them of round-the-clock free power supply from the 2018 Rabi season, which entails expenditure of another Rs 7,000 crore. Currently, the state gives them free-of-cost power for nine hours a day.

KCR is plotting this and more on a road map aiming at an unprecedented win in the Assembly elections to ensure he continues to enjoy the support of the people beyond a five-year tenure.

He is particular about wooing women voters, and his calculation is that about half of the 60 lakh-odd women beneficiaries of different doles, that amount to Rs 3,000 crore a year, will back the TRS. He expects the same support from more than half the 25 lakh farmers.

The wooing is also being extended to leaders from other political parties, to be doubly sure that the TRS has experienced contestants as well as foot soldiers.

Rivals are not impressed. “KCR is a merchant of daydreams. He is peddling promises that he cannot implement,” says veteran Congress leader and ex–minister S Jaipal Reddy.

But the TRS chief is a meticulous planner who pays extra attention to detail to whatever he initiates and executes, to ensure he reaches his goal. In working towards this end, he has ensured that the TRS enrolls more than 75 lakh members, who have been offered accident and health insurance covers with other benefits.

Beyond wooing voters, KCR is banking heavily on three big-budget development programmes to transform Telangana and help the TRS gather critical mass at the polls.

The promise of double-bedroom houses for the poor, Mission Kakaitya to desilt 23,000 irrigation tanks for higher-storage capacities and recharging of groundwater and Mission Bhagiratha to supply potable water to all households, are expected to yield rich political dividends.

All this is buoyed by the state faring well in economic growth. The Gross State Domestic Product (GSDP) of Telangana grew 10.1 per cent in 2016–17 to 5.11 lakh crore, thus clocking a rate of growth higher than the national average (7.1 per cent) for the third year in a row. This is largely because of the push by the services sector and robust information technology and pharmaceutical exports.

This prompts KCR to claim that Telangana is a role model for the country for not only creating wealth, but also distributing it among the poor.#KhabarLive