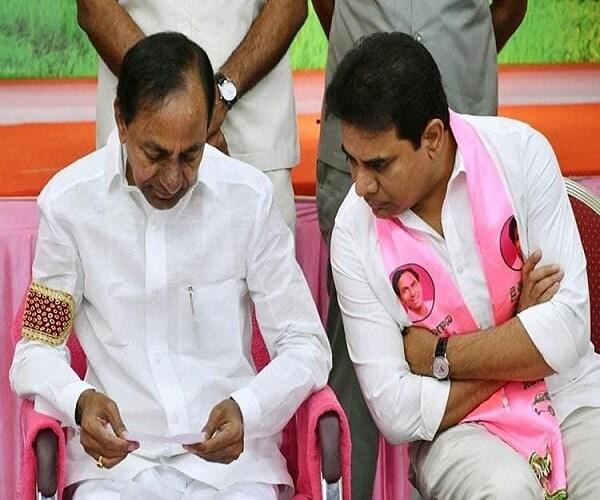 The inner circles in Telangana’s ruling TRS are agog with the expectation that KT Rama Rao, Chief Minister KCR’s son and Minister for Information Technology, is all set to become the Chief Minister later this year. There seem to be strong reasons for such a succession so early in KCR’s second term.

Sources close to the Telangana CM reveal that he is conscious of the mistake made by Congress President Sonia Gandhi. Besides, KCR has reportedly quoted the example of Mulayam Singh Yadav. The idea is to execute the succession plan when he is physically and politically in an unassailable position.

Though the TRS may officially deny it, it’s common knowledge that KTR and T Harish Rao, KCR’s nephew, compete for KCR’s legacy.

Harish Rao entered politics much before KTR joined the movement for separate state. He is widely regarded as a party strongman, known for consummate accomplishment of political tasks given to him by KCR. Besides, he enjoys massive popularity, both within the party and with the people of Telangana. He is also hailed as someone who has a command over the affairs of Telangana next only to KCR. He became a minister in the YS Rajashekhara Reddy government when TRS was part of the UPA even before he became a legislator. This indicates the formidable confidence he enjoys from KCR.

But, when it comes to succession, obviously, the son gets the preference. TRS is no longer a political movement but is a political party much like any other regional outfit.

KCR, who understands politics better than most others, executed a carefully chalked out strategy of succession. Though Harish Rao remained a key cabinet minister, his political space is largely restricted. There are reports within the party that even his ministerial powers are largely tightened.

TRS circles, however, state that this is not due to any aversion KCR has towards Harish Rao. Even today, KCR and Harish Rao enjoy considerable affection for each other. In fact, this respect and love for his uncle is what restrains Harish Rao from revolting despite ample provocation from within the party and incitement from across the political opposition.

Despite all that, Harish Rao has demonstrated a clear and unequivocal loyalty to KCR’s leadership. He has also made it clear that he would not have any objection to work under KTR’s leadership provided his self-respect is not undermined.

However, KCR is aware of Harish Rao’s political potential and the possibility of competition within the family for his legacy. Thus, KTR was promoted carefully. He was given the key responsibilities within the party and the government. The bureaucracy and the party rank and file have been given enough indication that KTR will succeed KCR as the TRS supremo and the state chief Minister if the party remains in office.

KTR’s influence within the government has increased considerably. In fact, today he enjoys support even among younger sections who may not adore KCR. KTR’s globalised outlook and the style and content of his functioning has earned him admiration within the party and with the people. His acceptability increased after he assumed the charge of party working president. Thus the carefully promoted ‘Brand KTR’ has helped KCR make the succession process smooth.

But, KCR is well aware of the fissures within the TRS. There is already a split between two groups – those who joined the TRS after it came to power, euphemistically called the golden Telangana batch, and the original Telangana batch, that is those who have been with KCR right from the days of the statehood movement.

The TRS has grown to a level wherein there are multiple contenders, many a time equally strong in every constituency giving the party leadership some difficult choices to make. This competition is a perfect setting for any possible dissension. The dissatisfaction about Harish Rao is a well-known fact and it is permeating within the party ranks too.

Even the people of Telangana have been unhappy at the manner in which Harish Rao has been marginalised in the recent past though they are not averse to KTR’s leadership. More significantly, Harish Rao’s conspicuous absence at the Kaleshwaram launch surprised everyone. It has not gone down well with both political circles and the people at large.

Interestingly, both KTR and Harish Rao enjoy a positive image within the party and among the people. This makes KCR’s balancing act a difficult one.

Meanwhile, KTR is now given electoral tasks, something that Harish Rao used to do in the past. This was evident during the last Assembly elections and the present municipal polls. KCR is astutely passing on the credit of TRS’s electoral success to KTR, at least partly. This is quite in contrast to what N Chandrababu Naidu did in Andhra Pradesh. Naidu failed to ensure similar acceptability of his son Nara Lokesh, both within the party and among the people. Even now Naidu is in the forefront of the anti-Jagan crusade while Lokesh acts like any other lower ranking TDP leader.

KCR is certainly wary of several factors that can prove to be a slip between the cup and the lip as far as elevating KTR to be his political successor. The TRS has to face the electorate in 2023 after 10 years of rule. There is every possibility of a party incurring anti-incumbency after a decade of rule. Though the opposition is yet to gain any credibility or confidence among the electorate, people are not favouring KCR 2.0 when compared to KCR 1.0. The elevation of KTR would also help in preventing this discontent turning into any significant anti-incumbency.

Meanwhile, the BJP is emerging as yet another challenger to TRS. The party winning four Lok Sabha seats polling as many as 20% votes is something no one can dismiss easily.

Meanwhile, the Harish Rao phenomenon may become more pronounced if the TRS fails to retain the present pro-incumbency. The party will rally behind the leader as long as he enjoys public support. KCR is fully aware of this opportunistic character of politicians, including the pink ones.

Speculation is also rife over the possibility of the BJP fishing in TRS’s troubled waters. Any operation by the saffron brigade to embrace Harish Rao can prove to be a source of trouble for KCR. Though Harish Rao has not indicated any such move so far, nothing can be ruled out in power politics. KCR, who was a witness to the developments in the TDP, is certainly extra cautious to prevent any such challenge to his legacy as was the experience of NT Rama Rao.

Against this fast-changing political landscape, the political grapevine that KTR may assume the chief ministerial mantle any time after the municipal polls attains credibility. #KhabarLive