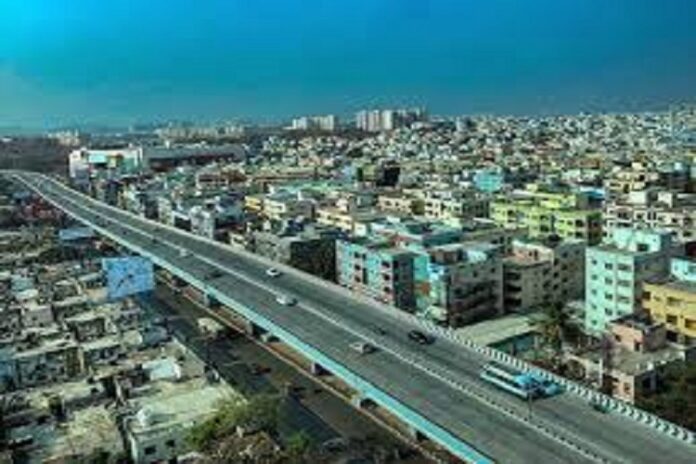 49 / 100
Powered by Rank Math SEO
Though there was euphoria among locals right after the creation of Telangana, there was concern too. From where will the revenues come for the new state of Telangana?  This was the issue, especially because the new state had very little revenue sources, much of it going to Andhra Pradesh after the division.
But the scion of the Kalvakuntla family K Taraka Rama Rao (KTR) was unfazed. Enthused after participating in a conference organized by the prime local chamber of commerce, KTR came up with his own plans shortly thereafter. “Hyderabad is a prosperous city, why don’t we rapidly expand the city – to say- half the state? This will lead to huge prosperity by urbanizing Telangana,” said KTR, with a glint in his eyes. He left unsaid that this would fill the coffers of the state and boost its revenues to unprecedented levels.
Although Telangana government move to dislodge Village Revenue Officers (VROs) from the Revenue Department’s hierarchy has been justified as one that is intended to remove massive corruption at that level, the real point has been glossed over. This is that land values have grown so rapidly in Telangana after the new state was created that Village Revenue Officers, by virtue of the position, have come to wield by default (not design) tremendous powers.
Many of them must have been using those powers to the hilt to fill their own coffers, resulting in frequent charges of corruption. Since the state government wants to monitor the activities at the grassroots level, it has set up a new system where power will flow to a higher level. This will help the bosses of the state to keep a tab on the goings-on in an effective manner and re-fashion development the way they want.
For the benefit of those who came in late: the VRO as an institution had been created by N T Rama Rao shortly after he came to office in 1985 as a move to decentralize power. NTR dismantled the Patel-Patwari (Karanam-Munasabu) system and introduced the VROs. But now things are moving in the reverse direction.
After Independence there have been several land reforms.  It is a different matter that land as a resource became relatively less important as industrialization picked up pace in the country. But with the process of far-reaching reforms initiated in 1991 matters took another turn. With urbanization becoming very important, and with land values going up rapidly, land became a prime resource once again. Political bosses – starting with N Chandrababu Naidu realized the importance of land and how it could be used to create riches and attract investors. He knew that he was sitting on virgin land in the state that could be converted into riches.
Little wonder that Naidu started breaking the rocks around Hyderabad and making way for more land (in the process of course, filling up lakes). This expanded Hyderabad and industrialists – of various kinds, including Ramalinga Raju of Satyam, rushed in to make the moolah. Many cornered land and began to trade in it. With the entry of Microsoft, Indian School of Business and other IT majors, land values increased manifold.
Hyderabad in its infancy grew around the Charminar and anything outside the area was the new city. With the passage of time, the city expanded, with Banjara Hills, Jubilee Hills and other upscale areas housing the country homes of the nobility. But this was natural expansion that had been subsumed by the forced expansion by Naidu and then followed by YSR and now by KCR and his son KTR. With the creation of Telangana, Hyderabad has come to a new stage. The KCR-KTR duo now wants to guide the process by rapidly modernizing and extending Hyderabad at top speed.
Whether this is good for the people of the new state is a moot point. But at this rate, Hyderabad will be soon without its rocks and hills and sans its lakes and greens. The over 450-year-old Hussain Sagar lake has shrunk to alarming levels.  It is estimated that in the past 30 years, the lake has shrunk about 40 % of its original size (550 ha to 349 ha).  The natural beauty of the city once bandied about as the ‘City of lakes’ will be replaced by huge concrete constructions and broad roads.
Hyderabad will become a huge city, looking like any other in the country. The uniqueness that defines it will obviously be a matter of the past even as the weather becomes hot. So this expansion and modernization will be for whose benefit? A moot point that. #KhabarLive #hydnews
ALSO READ:  Why KCR Suddenly Diverted His Concerns Toward 'Unemployment' In Telangana?