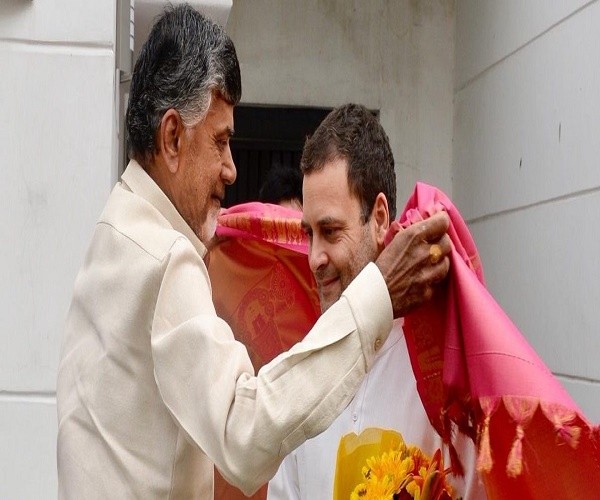 That NT Rama Rao (NTR) would be tossing in his grave seeing son-in-law Chandrababu Naidu joining hands with the Congress party, is what you are likely to hear on the streets of Andhra Pradesh.

In 1982, NTR had launched the Telugu Desam on the plank of Telugu atmagauravam (self-respect) and dislodged the Congress within eight months. Anti-Congressism has been the TDP’s principal plank over the years and pretty much its political identity.

Who Will Benefit More from Naidu’s Ties With Cong?
I see it differently, however. In fact, Naidu has completed what NTR set out to do. The TDP reduced the Congress to a zero in the residuary state of Andhra in the 2014 elections, with not a single lawmaker in the Assembly or Parliament, and four years later, is looking to make it its B-team in the state.

On the face of it, the Congress may look at it as an opportunity to win some seats as an ally and make a comeback in the Andhra assembly.

But in the long run, the party unit will become a mirror image of its Tamil Nadu, Bihar and Uttar Pradesh units, dependent on a powerful regional ally for political oxygen.

Naidu is a sharp politician. In 2014, when he realised that actor-turned-politician Pawan Kalyan had the potential to swing Kapu and youth votes, he decided not to sit on pride waiting for the Jana Sena leader to make the first move. He drove to Pawan’s residence in Hyderabad to persuade him to join hands.

Naidu meeting Rahul Gandhi on Thursday is proof of similar thinking. Naidu, since he became chief minister in 1995, has never contested an election on his own.

Naidu’s alliance with the Congress brings to the table a number of advantages.

Andhra Congress’s DNA Has Been Altered
At an Andhra-level, he will stand to gain from the traditional Congress vote that still exists in almost all constituencies. In a tight contest, that could make the difference between victory and defeat. Two, the Congress with its Reddy leadership could help in cutting into the dominant Reddy base of the YSR Congress, especially in the Rayalaseema districts.

Does the state unit of the Congress gain? Zilch. It will have to bear the burden of five years of anti-incumbency of the Naidu regime without having had any role to play in its omissions and commissions. Naidu is also known to be a tough bargainer and is unlikely to give away too many winnable seats to the Congress.

Three, the Congress, that has also thrived on an anti-TDP plank, will find it tough to convince its rank and file that its essential DNA has been altered.

Four, most of the senior Andhra Congress leaders were colleagues of YS Rajasekhara Reddy, who Naidu described a decade ago as the `Raja of Corruption’. Would it carry credibility when the likes of Raghuveera Reddy and KVP Ramachandra Rao now join hands with the man who badmouthed their late leader? Expect some disgruntled leaders who are staunchly anti-TDP, to walk out of the Congress.

How is Andhra Alliance Different from Telangana Experiment?
Conversely it will be argued that if the Congress contests alone, it will be an also-ran in the five-cornered contest that will then take place between the TDP, YSR Congress, Jana Sena, BJP and the Congress in Andhra Pradesh. A tie-up with the TDP gives it a realistic chance to take the first step towards making a comeback.

The hand of former Kerala chief minister Oommen Chandy, who is the AICC general secretary, in-charge of Andhra, is visible in this tie-up. Chandy, having helmed the UDF in Kerala and with the experience of working with different parties with their specific political interests, has always emphasised on forging useful political friendships. At the national level, senior leader Veerappa Moily has said Naidu’s TDP is welcome to join the UPA.

The Congress and the TDP have already come together to fight the 7 December assembly elections in neighbouring Telangana. So how is the Andhra alliance different from the Telangana experiment?

In Telangana, the two parties are fighting on the common plank of opposition to the TRS and that is a strong glue to hold them together. In contrast in Andhra, the ruling party and an opposition party are coming together.

Is the Congress party then looking at the TDP through the 24 Akbar Road prism instead of focusing on Andhra? Yes. In the Congress book, the losses in Andhra are insignificant compared to the gains it will make at the national level. The calculation is that the entry of a heavyweight like Naidu, despite Andhra contributing only 25 seats to the Lok Sabha, will bring political heft to the anti-BJP formation.

Propelling Naidu to National Stage
Moreover, Naidu has the experience of having worked with many of the regional players in his previous avatar as United Front convener in 1996-98 and the Congress would look to outsource the task of getting them on board and ironing out their differences to Naidu. The TDP chief has reportedly promised to devote more time to national politics in what he calls is a bid to “save the nation”.

Also given the complete breakdown in friendship with the BJP, Naidu is likely to take the lead in attacking Narendra Modi and company.

But it is not that Naidu does not need the Congress at the national level as well. After the recent Income tax raids on TDP leaders including Rajya Sabha MP CM Ramesh, there is considerable apprehension that the agencies will be tasked with going after those close to Naidu. The TDP therefore needs the surround system to create enough noise nationally should he be directly targeted.

The optics of the Naidu-Rahul meeting will also position the Andhra CM in a more national role. Naidu on many occasions has spoken about how he turned down the offer to become PM in 1996-98. Should the UPA have a realistic chance to form the government, Naidu two decades later may be more willing. His visit to Delhi, the second within a week, is also to position him as a contender for the top job. This is also what some of his MPs have been articulating.

Will Andhra Trust Naidu With His ‘Musical Chairs’ Friendships?
Apart from the regional and the national angle, there is a personal angle to this as well. If Naidu is able to pull this through – and there are many ifs and buts – and retain power in Amaravati while dislodging the NDA in New Delhi, Andhra, the sunrise state could see a son-rise. Naidu would look to pass on the baton to his son Nara Lokesh, who is TDP general secretary and IT minister in his cabinet now and move to the Centre.

On the ground, Naidu would justify his business relationship with the Congress by pointing to Rahul Gandhi’s promise to give special category status to Andhra if the UPA comes to power.

Ironically, in 2014, Naidu had pitched for the BJP, underlining that it had promised special status not for five years but for a decade. All will now depend on whether Andhra trusts Naidu with his friendships of the musical chairs variety every five years. #KhabarLive