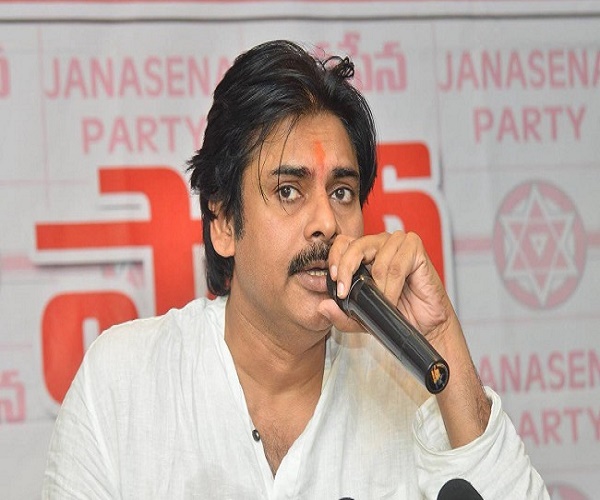 Lending credence to Pawan’s possible aligning with the TDP, he avoided issues that could embarrass the ruling party on his tour.

During his current visit to Andhra Pradesh’s Rayalaseema region, Jana Sena Party (JSP) leader Pawan Kalyan has made his position with regard to the state’s politics very clear.

The JSP chief called on the AP Women and Child Welfare Minister Paritala Sunitha in Anantapur district on Sunday, and exchanged niceties and accepted refreshments after an interaction with farmers.

The actor had earlier praised Telangana Chief Minister K Chandrasekhar Rao for his “bold” initiative of free power for farmers before he undertook his road show. In his latest tour too, he expressed a similar stand about his relations with the TDP government in AP through his gestures by seeking to pursue a ‘politics of representation’.

Stalked by the spectre of suicides, drought and adverse market conditions, farmers were eagerly waiting for the actor’s plan of action. But Pawan said he would take up their problems with the government for remedy.

Pawan’s “study tour” in Rayalaseema coincided with the marathon padayatra launched by Leader of Opposition YS Jaganmohan Reddy of the YSRCP. Pawan’s move has obviously provided fodder for political observers to brood over the agenda of his tour.

His visit also assumes much significance at a time when the pre-election surveys conducted by Republic TV/C-Voter agency and former MP Lagadapati Rajagopal of the Congress show increasing groundswell against the TDP regime.

Pawan stated that he would run for office with Rayalaseema as his headquarters. YSR Congress MLA Buggana Rajendranath suspects that Pawan is playing into Naidu’s hands. “The JSP with its tactical presence in the Assembly segments on a selective basis will help the TDP by splitting the anti-government vote,” Rajendranath told TNM.

Balijas, one of the sub-castes of Kapus from which Pawan hails, is predominant in Rayalaseema. Besides, Pawan enjoys a considerable following among upwardly mobile educated youth. Rayalaseema proved to be a tough terrain for the TDP in the 2014 election in terms of electoral gains. YSRCP bagged 29 seats while the TDP settled for 23 out of the 52 seats in the region that comprises of four districts. Incidentally, Chief Minister Naidu and YSRCP’s Jagan Reddy come from Rayalaseema.

Lending credence to Pawan’s possible aligning with the TDP, he conspicuously avoided touching upon issues that could embarrass the ruling party during the visit.

These issues include unrest in the region over backwardness propelled by growth imbalance in Naidu’s 3.5 years of rule; poor progress in the Handri-Neeva Sujala Sravanthi project that aims to be a remedy for drought by irrigating 1.9 lakh acres with Krishna water; skewed government policies leading to adverse market conditions for agricultural products; distress and deprivation in the agriculture sector resulting in suicides and migration of people in search of employment.

Pawan also remained silent over the half-hearted package delivered by the NDA government (through the Andhra Pradesh Reorganisation Act, 2014) for the development of backward areas, which include the Rayalaseema districts, leave alone the special category status.

Pawan took upon himself to question the governments at the centre and in the state after helping the alliance partners win the election in 2014. He seemed to be doing a U-turn in his current visit to Rayalaseema. In contrast, he demonstrated different stands in the past by backing the agitation against a food park in Bhimavaram and protests by farmers in Amaravati against acquisition of farm lands by coercion.

Naidu is striving hard to douse the flames of anti-incumbency, which reportedly manifested more in the rural parts of AP during the surveys. He initiated a slew of measures in this direction, including realisation of his election eve promise for waiver of farm loans and SHG loans, and hiking of pensions.

Besides, he is sparing no effort to complete the multi-crore Polavaram project before the next election, regardless of roadblocks from the Centre. Still, the government is feeling the heat of anti-incumbency. Increasing corruption, alienation of ruling party MLAs from people with their autocratic behaviour and the manner in which the Janmabhoomi committees are functioning in the delivery of welfare schemes are considered triggers for the anti-government sentiment.

As part of social engineering, the TDP government implemented its promise of 5% quota for Kapus in education and employment by passing a bill in the Assembly. Naidu accommodated four leaders from the Kapus in his council of ministers and elevated one of them as Deputy Chief Minister.

Harsh measures adopted by the government to fizzle out the quota movement launched by iconic Kapu figure Mudragada Padmanabham hurt the sentiments of the community.

Naidu is accused of keeping quiet after passage of the quota bill without taking it to its logical end by lobbying with the NDA government.

A family friend of Pawan Kalyan from Bhimavaram in AP’s West Godavari district, in a conversation with this author, warned that his aligning with the TDP will only result in a shift of Kapu votes in favour of YSRCP in the coming elections. Kapus are heavily populated in the central parts of coastal Andhra comprising four districts.

JSP’s support held the key to the victory of TDP-BJP in the 2014 general elections. The slight margin of 2.06% votes between the TDP and the YSRCP tilted the scales in favour of the former. Keeping in mind these shaky ground realities, Naidu keeps all his manoeuvrability at work to keep the actor in his fold until the next election also. #KhabarLive