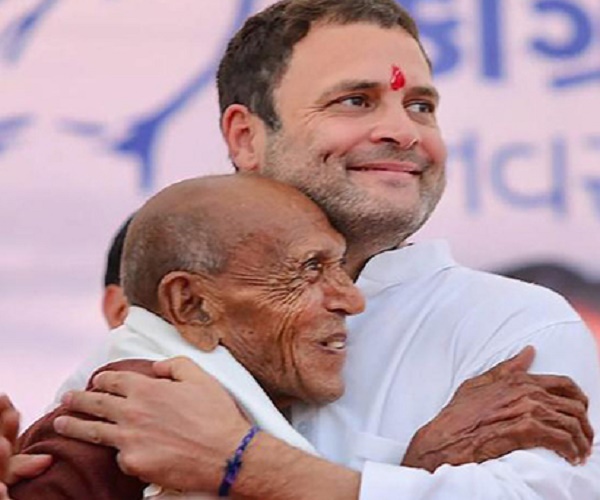 The Congress president’s embrace of his Hindu identity softens the charge that the grand old party is pro-minority and anti-Hindu.

Winning a general election needs a mix of chemistry and mathematics. Congress president Rahul Gandhi will need the right combination of both to lead a UPA 3 coalition to victory in the 2019 Lok Sabha elections.

The chemistry will come from the soft-Hindutva he has adopted since its relative success in the 2017 Gujarat Assembly election. He has continued to temple-hop in Karnataka which goes to the polls in April-May 2018. Karnataka is something of a quarter-final leading up to the December 2018 semi-final in Rajasthan, Madhya Pradesh and Chhattisgarh. If Rahul’s newly acquired Hindu-centricism works in Karnataka, he will double down on it in the three big states later this year before the 2019 Lok Sabha polls.

How might the math work out in 2019? For the Congress to win power in the next Lok Sabha elections, it will need to win at least 150 seats as I explained here since UPA 3 allies are unlikely to contribute more than 120 seats. In order to win those 150 seats the Congress will need to clock a national voteshare of at least 27 per cent, a bit above the 26.70 per cent it won in 2004 when it captured 145 seats.

The problem, often overlooked, is that Congress voters are widely diffused. BJP voters are more concentrated in specific constituencies. Hence, the BJP could win 282 seats in 2014 with a mere 31.34 per cent voteshare. The Congress, with its dispersed voters, would need over 35 per cent national voteshare (as in 1991) to win a similar number of seats. In 1991, despite winning 35.66 per cent national voteshare, the PV Narasimha Rao-led Congress won only 244 seats.

Will Rahul’s discovery of temples help the Congress bump up its voteshare from 19.52 per cent in 2014 to around the 27 per cent voteshare level necessary to get within striking distance of 150 seats in 2019? Voteshare-to-seat conversion anomalies and an increasingly fragmented polity make predictions hazardous.

Rahul may have grounds for optimism though. Three pieces of dice have recently rolled in his favour. First, the middle-class vote is up for grabs. Disillusioned with the Narendra Modi government’s tax policies, the small but influential Hindu middle-class could lean towards the Congress which it had rejected en masse in 2014.

Second, the charges of cronyism against the Modi government, however thin, will resonate in small-town India. Modi came to power because the Congress was irredeemably corrupt. Now if the Congress can show that the BJP is not much better, it will blunt the biggest instrument Modi used to bludgeon the Congress to defeat in 2014.

Third, Rahul’s embrace of his Hindu identity softens the charge that the Congress is a pro-minority, anti-Hindu party. The charge was particularly effective when an Italian-born Catholic, Sonia Gandhi, led the Congress. A born-again Hindu Rahul Gandhi can win over fence-sitting Hindus who have never been wholly comfortable with the RSS’ hard Hindutva and Hindu Rashtra doctrine.

That’s where the good news for the Congress ends. While the Congress probably needs a voteshare of at least 27 per cent or more to win 150 seats and stich together a workable UPA 3 coalition, the BJP’s concentrated voter base can ensure that it wins 220-240 seats with a similar voteshare of 27-28 per cent – despite losing one-tenth of its 2014 voteshare of 31.34 per cent. Remember too, that way back in 2004 it won 138 seats with just 22.16 per cent voteshare. Since then the BJP vote base has strengthened in key states like Odisha and West Bengal and in regions like the Northeast. A 27-28 per cent voteshare could take it to over 220 seats, the minimum necessary for Modi to form a stable NDA government.

Events too may work in the BJP’s favour. The growing crescendo over building the Ram mandir will give the party significant tailwind. An escalating conflict later this year with Pakistan will further coalesce the “hard” Hindi vote behind it. Vajpayee’s re-election in 1999 after the Kargil war is a potent reminder of how events can influence elections.

Messaging will be crucial in the run-up to 2019. The Congress has a roster of experienced hands to communicate its message: Kapil Sibal, P. Chidambaram, Manish Tewari, Abhishek Manu Singhvi, Shashi Tharoor, Jyotiraditya Scindia and Sachin Pilot at the senior level; Randeep Surjewala, Ajay Maken and Pawan Khera in the middle; and a smorgasbord of spokespersons who outmanoeuvre BJP spokespersons every night on news television.

The BJP’s most articulate ministers like Smriti Irani and Piyush Goyal are rarely fielded. Ravi Shankar Prasad and Prakash Javadekar sound defensive and didactic even when the facts are in their favour.

Above all, Rahul comes across as approachable. Modi, a brilliant orator in public, is increasingly seen as somewhat aloof. Not having regular structured press conferences is a strategic mistake. In the end, elections can be won and lost on perception.

However, despite its glib messaging, the Congress’ top leadership, including Rahul Gandhi, has not spelled out alternative economic or foreign policies. It is content to taunt the prime minister on Twitter, often in an embarrassingly juvenile manner. Several Congress leaders are tainted by allegations of corruption but the BJP’s amateur messaging allows them to point a finger of corruption at the BJP without the risk of three fingers pointing right back at them.

If the BJP loses the 2019 Lok Sabha election – and despite everything it probably won’t – it will have nobody to blame but those three limp fingers. #KhabarLive