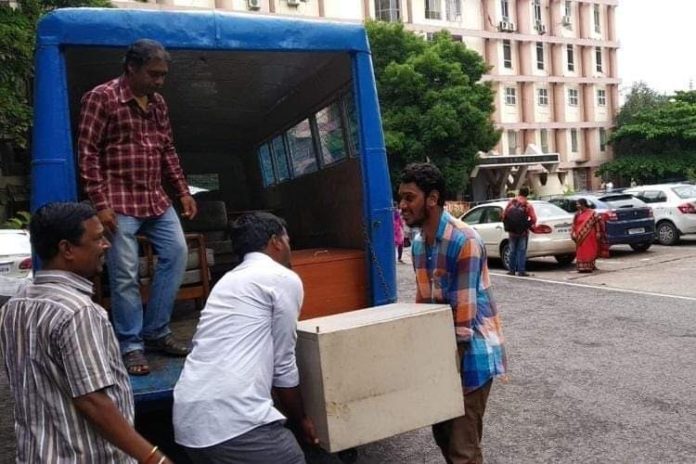 In what seems to be a move to speed up the construction of a new Secretariat in Hyderabad, the Telangana government has ordered bureaucrats and officials to shift out of their present offices immediately.

Several workers were seen shifting furniture, files, documents and other items on Thursday evening to Burgula Rama Krishna Rao (BRKR) Bhavan, where temporary arrangements have been made to accommodate various departments.

Chief Secretary S K Joshi was overseeing the shifting to ensure that it was done as soon as possible so that work could begin on demolition and construction of a new Secretariat.

The roads and buildings (R&B) department along with Minister Prashanth Reddy, were the first to move out, on Wednesday night, following which all other departments have also followed suit.

The General Administration Department (GAD), which itself is almost done with the shifting process, has been handing out letters to the heads of departments to expedite the process and finish shifting before the end of the week.

The shifting is part of Chief Minister K Chandrasekhar Rao’s grand plans for a new Secretariat and Assembly, for which he laid the foundation stone on June 27.

However, KCR has been facing opposition from activists and all other political parties in the state, who contend that the facilities at the existing structures are adequate. They have also condemned the expenditure from the state’s coffers for the construction.

Descendants of Nawab Fakrul Mulk, a noble of erstwhile Hyderabad State, have also opposed the plans to demolish Errum Manzil, which is a family palace built by him about 150 years ago and later handed over to the government. #KhabarLive