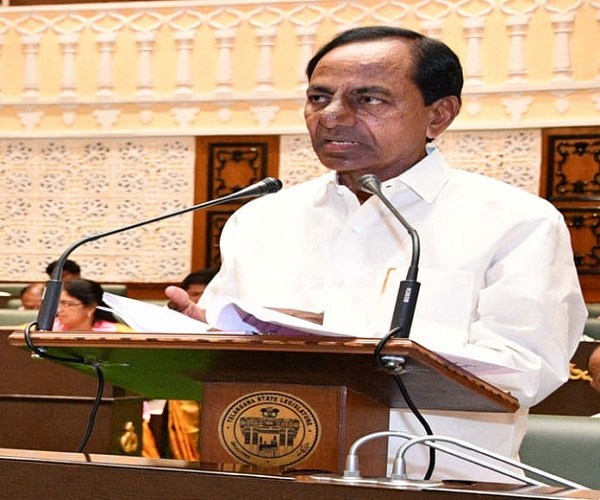 Telangana Chief Minister K Chandrashekar Rao presented the Vote-on-Account Budget of the Telangana State for the year 2019-20 on Friday in the State Assembly. This is the sixth Budget of the new State of Telangana and first in the second term. His budget speech for an hour touched every aspect of Telangana people and to put it in simple words, it is for the welfare of people. There are special reasons for Vote-on-Account Budget as detailed by the Chief Minister in his speech.

He said that once the Union government introduced the full-fledged budget after elections, the quantum of allocation to each State including Telangana would be known and hence there would be some clarity.The State that came into existence on June 2,2014 as a separate one started its difficult and challenging journey of rebuilding and reinventing Telangana. The benedictions of God, support of nature and people helped Telangana to emerge as a strong and number one State in the country in several aspects.

Within a period of less than five years, Telangana has become a pioneer and a role model for the entire nation. The Telangana model of inclusive development has become a buzz word. Today thanks to umpteen welfare and development programmes, every household is benefitted from one programme or the other and many more than one.Chandrashekar Rao and his government had no clue in the beginning with regards the formulation of budget for the year 2014-2015, the first year the government came to power.

To identify the major priority areas in each sector and resources required, the State government constituted 14 task forces. Based on the reports of the task forces, the first Budget of the Telangana State was presented to the State Legislature on November 5, 2015. Thus, the first Telangana Budget was a major departure from the past both in its approach and content, despite not having full comprehension about the financial position of the State.

That Budget was in continuation of the Vote-on-Account Budget presented by the earlier government of the undivided State. The first full-year Budget for 2015-16 was prepared without the benefit of having estimates for the full 12 months of the previous year.By the time, the preparation of the State budget for 2016-17 was underway, the government was able to get a comprehensive idea about the trends in the State finances. It is only after the income and expenditure under Plan and Non-Plan schemes from 31st March 2015 to 31stMarch 2016 was known clearly, the real basis for Telangana State budget calculation was arrived at.

The first-year budget after formation of Telangana was on ad-hoc calculation based on earlier budgets and the second-year full-fledged budget is based on some exercise. Subsequently, there was a total understanding and deep study department wise, scheme wise and priorities wise. Though the Budget for 2016-17 was the third Budget of the State, it was in a way, the first full-fledged Budget to be prepared after a comprehensive review of all items of expenditure and a realistic assessment of resources.

In the process, the fourth consecutive Budget, for the year 2017-2018, was both inspirational and message oriented. The Budget reflected the government’s objective of reaching out to all sections of the people, all those in the hereditary professions, all religions, people working in various fields, all government departments that are entrusted with the implementation of development and welfare schemes, lower income as well as middle income groups and with no exception.

The budget for the year 2018-2019 highlighted as to how the schemes and programmes that were under implementation during the first four years could be standardised, stabilised and consolidated. This year’s Vote-on-Account details the happenings during the past five years and what would happen in the next five years. The Chief Minister in his speech dwelt in detail about every scheme. He said that the government implemented ‘Aasara’ pensions to ensure dignified life to the aged, widows, beedi workers, single women, filarial patients and the physically challenged.

Through the scheme which brought happiness to several families, the amount that is being paid till now will now be doubled and eligibility age limit will be reduced to 57. The Chief Minister mentioned that his government would introduce the second farm loan waiver scheme under which, as was done in his first term, outstanding crop loans of farmers up to Rs 1 lakh will be taken over by the government. This demonstrates unequivocally the commitment of the KCR government towards the welfare of farmers.

Referring to Kalyana Lakshmi and Shaadi Mubarak schemes, the Chief Minister said these apart from providing financial assistance of Rs 1,00,116 for girls’ weddings which was a relief to the poor had almost eliminated the menace of child marriages in the State. About “Rythu Bandhu”, the Chief Minister said the scheme had been lauded as innovative by economists and agriculture scientists. He said that unlike Telangana scheme which covered all land owners without any limit on land holdings and without any conditions attached to such support, a couple of States and even the Centre introduced the scheme with some riders.

Farmer Group Insurance Scheme for all the farmers in the age group of 18-59 is another one which the Chief Minister mentioned. Under the scheme, the sum assured is Rs 5 lakh in the event of the death of the insured farmer. The premium under the scheme is paid entirely by the government to the Life Insurance Corporation of India.

In his budget speech, the Chief Minister made a mention to almost all welfare measures and how they benefited the people as well as the budgetary provisions made for each of them. To reduce infant and maternal mortality, said the Chief Minister, the KCR-KIT scheme was introduced. This provides wage compensation of Rs 12,000 in case of male child and Rs 13,000 in case of female child and a kit worth of Rs 2,000 containing items of utility for the mother and the child for women undergoing deliveries in government hospitals.

The government also started women residential colleges beginning with 30 in the first phase for SCs, 22 for STs and one for BCs.The government’s intention to introduce unemployment allowance in accordance with the election promise was announced by the Chief Minister. Detailing the government’s commitment towards empowering local bodies as evident from the recent enactment of a new Panchayat Raj Act, the Chief Minister said every Gram Panchayat was mandated under the Act to strive to transform the village into a model village and to prepare a plan and a budget for implementing it.

He mentioned about irrigation projects, water supply and other infrastructure facilities in the State. Vote-on-account is in the direction of fulfilling the promises made in election manifesto. #KhabarLive