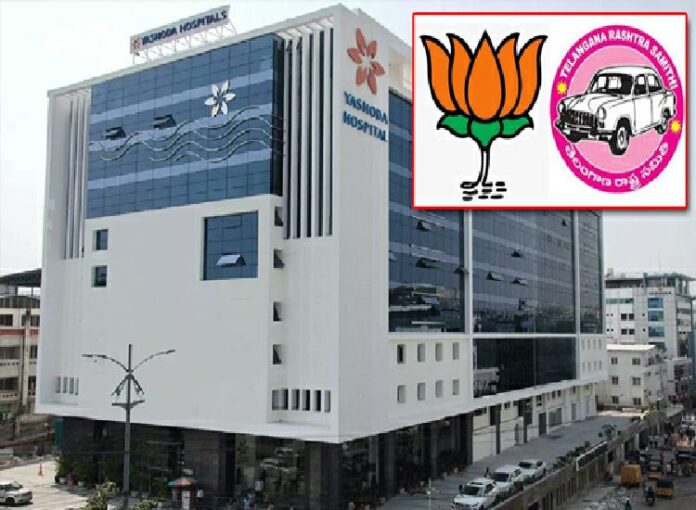 Will witch-hunt of TRS leaders begin now? This is now at the back of mind of the cream of TRS leadership, following Income Tax raids on Hyderabad-based Yashoda Hospitals group over the past two days. The raids of have created a buzz in political circles not only in Telangana, but also Andhra Pradesh as the hospital management is known to be close to the ruling TRS leadership.

The raids have triggered fears of more such raids involving central agencies like ED (Enforcement Directorate) in the coming days in Telangana on industrialists, businessmen and contractors known to be close to TRS leadership. For, there are instances of such raids on persons, groups considered close to anti-BJP parties in states where BJP is trying to emerge as a formidable force.

The recent Dubbak Assembly bypoll and the Greater Hyderabad Municipal Corporation elections proved that BJP has established itself as the main rival for TRS in Telangana.

The raids on Yashoda Hospitals, which began early on Wednesday, continued until Thursday. Sleuths of the I-T department carried out searches on properties owned by Yashoda Healthcare Services Pvt Ltd that runs a chain of corporate hospitals in the twin cities. On day one of the searches, unaccounted cash and gold was seized, sources said.

Around 20 teams, reportedly serving in the anti-tax evasion wing of the I-T Department, knocked on the doors of Yashoda Healthcare’s directors. Extensive searches were carried out at the corporate office located in Nagarjuna Hills and many senior doctors were reportedly questioned.

The searches began at the residences of one director who later accompanied the IT officials to the head office, an employee with Yashoda Hospital said. Concurrently teams were at the Secunderabad, Malakpet and Somajiguda hospital branch. The sleuths reportedly found unaccounted cash at the Punjagutta office.

According to the company records, the directors of Yashoda Healthcare Services Private Limited are Pavan Kumar Gorukanti, Gorukanti Vijaya Lakshmi, Ravender Gorukanti Rao and Suresh Kumar Tummala who was appointed in February 2020.

The longest standing director Ravender Gorukanti Rao shares directorship in 16 other companies. They include health care and construction, for instance Yashoda Pharma and Drugs, Springfield, Wanton builders, Bell woods, Mee Vasanthi. While Pavan Kumar Gorukati is also a director in seven other companies.

The I-T raids triggered speculations that apparently the BJP government at the Centre has decided to keep an eye on other industrial groups close to the TRS leadership as the BJP wants to cut away the umbilical cord of all monetary sources for the TRS by the next elections.

“Hitherto, KCR was trying to trouble the Congress leaders before the last Assembly elections by ensuring that they cannot take out their money bags in the elections. Now, the BJP is adopting the same strategy,” political analysts opine.

I-T raids on persons, groups known to be close to anti-BJP parties was one of the key issues just before the 2019 General Election, with most leaders accusing the BJP of targeting rivals through government agencies. Since the elections were announced, the I-T department conducted 11 raids on opposition parties – most of them on persons belonging to the TDP, which was the ruling party in Andhra Pradesh in alliance with BJP. Noticeably, these raids were conducted after TDP came out of NDA.

From March 10, 2019 — the day poll schedule was announced — to April 10, 2019, the I-T Department raided more than 84 places in 11 raids, all linked to the opposition parties. The maximum number of raids was conducted in Andhra Pradesh.

Then Chief Ministers of non-BJP states had questioned such raids, calling it partisan action on opposition leaders. They criticised the “selective searches” and accused the BJP of playing a “political revenge game”.

During this time, just one BJP leader was raided. The party distanced itself from the Uttarakhand leader.

Of the 15 raids against opposition leaders and their associates, five were in Karnataka, three in Tamil Nadu, two each in Andhra Pradesh and Delhi and one each in MP, UP and J&K.

Then Madhya Pradesh chief minister Kamal Nath’s associates were raided. In Tamil Nadu, DMK’s treasurer and Katpadi MLA Durai Murugan’s premises and institutions run by his son D.M. Kathir Anand were raided. The DMK has vehemently opposed the BJP, with its leader M.K. Stalin describing the Modi government as ‘fascist‘.

IT officials conducted raids in Karnataka, where the JD(S)-Congress alliance was in power in 2019. Karnataka Minor Irrigation Minister C.S. Puttaraju was the target of the raids. Also targeted were the premises of associates of Kumaraswamy’s brother, Public Works Department minister H.D. Revanna.