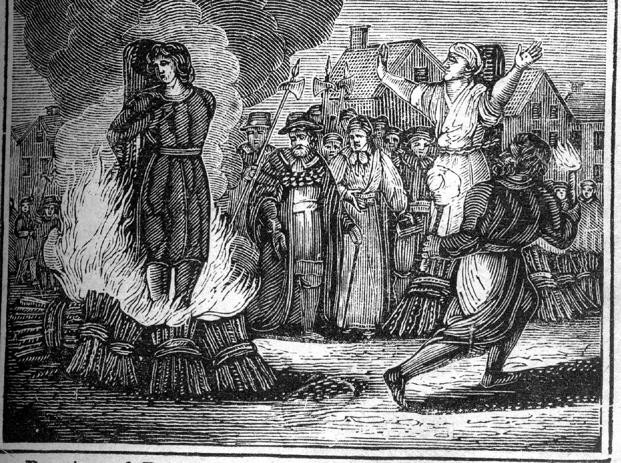 A look at attacks on innocent women branded witches in colonial India. Whether they travel on broomsticks in Europe, shape-shift in Japan or walk with upturned feet in India, witches have always captivated the imagination. Folk tales and superstition abound with these often sinister characters in various forms and guises.

Given the fear associated witchcraft, though, accusations of being a witch have been used across the world to target the weak—especially women. India is no different from any other country in this regard; interestingly, though, while there is no shortage of oral histories, we don’t see much in the way of archival records.

One reason for this is that the British banned witch-hunting in India around the 1850s. As a result, accusations of witchcraft were kept under wraps and very few cases made it to the British courts. Usually, the local law enforcement dealt with them. Those records are scanty, scattered and often lost.

Further, locating the historical narrative within a larger context is tricky. Witchcraft practices vary across regions, and the background of the practitioners depend on their cultural environment and economic strata. Writing a comprehensive history of witchcraft in India, therefore, is extremely challenging.

However, that doesn’t mean we can’t glean a few interesting insights. Of particular note is the Mandi Report, compiled in 1888, which documents numerous cases of witch-hunting from 1850 to the 1880s among the “Bheels who lived in the hilly tracts of Meywar”.

The Mandi Report can be best described as an umbrella project under which several cases were filed. It was put together to demonstrate the effectiveness of British rule in banning witch-hunting and a form of torture known as “witch-swinging”. The report contains 15 cases, highlighting the British efforts to “civilize” India.

The tone of the report varied from case to case, depending on the author; many of them, though, display genuine compassion, which led them to thoroughly investigate the deaths of women that were usually neglected by the local courts. In fact, there is evidence to suggest the courts’ active role in silencing these cases.

The first step in the witch-hunt was consulting the witch-finder or the bhopa. Only he could ascertain if someone was actually a witch. The bhopa chants various incantations to verify the people’s suspicions. If he declared the accused a witch, a few chosen men gagged and bound her.

The hapless woman would be brought under a banyan tree, and her eyes covered with a poultice of red chili paste. She would then be swung from the tree, often upside-down, from daybreak to evening. After that, she was untied, taken back to her home or held somewhere else, only to be brought back the next day to repeat the process.

The entire village would turn out to witness the swinging, an important social event. Usually, it went on for weeks. If the woman survived the ordeal, the outcome varied. Frequently, she was either forced to leave the village or face ostracism. In rare cases, though, she was freed of the accusation and received a reward, like a new sari or some sweetmeat.

The case of an elderly woman named Eullal, in the Mandi Report, illustrates the usual series of events.

A young man named Koobla, who lived in the village of Chhabra in Edur district. Koobla died in September 1850 after a prolonged illness, and his brother, Kooshal, was convinced that the person responsible for his death was Eullal.

She had bewitched him and watched him die a slow, painful death, Kooshal claimed. He decided to alert the village authorities. The inevitable happened, and Eullal, who was old and frail, did not survive the swinging for even a whole day.

Eullal’s story would have been lost like many others, had someone not reported the incident to a certain Captain Brooke, the Political Agent of the region, who decided to take action. Brooke treated the incident as murder, and ordered Eullal’s body be exhumed. They found traces of chili paste on her body and a large wound on her chest. Kooshal admitted to making the chili paste and applying it, but said he had no knowledge of the chest wound.

ALSO READ:  As A Married Indian Woman, Do You Follow 'Karwa Chauth' Custom?

In the end, Brooke failed to apprehend the bhopa and the other men involved in swinging. All he could do was impose a fine on the entire village, although he later asked his superiors to pardon this fine since the poor villagers would never be able to pay it.

The most long-drawn-out of the cases in the Mandi Report took place in 1872, involving a low-ranking government official, Kadur Bohra. This was referred to as the “Kushalgarh case”, in which an 80-year-old woman named Chhadoo was swung for days until she died.

The Political Agent of the area, Franjee Bheekajee, started investigating it as a murder case because there were rumours of bribery behind this swinging. Chhadoo had been financially stable, and owned a hut and some cattle. The investigation quickly showed that the village headman and a few influential members of the village council had colluded to target her. It was deemed a planned, cold-blooded murder, and Bohra, the official, had been bribed to not report the swinging to the authorities.

The investigation continued for two years, and ended with the imprisonment of the main culprits, namely the government official, the village head and the witch-finder. This is the only case in the report in which the culprits were brought to justice.

And then in 1883, in Kankend, a village in the Banswarah territory, a young woman named Dulloo was swung for more than a month; she had been accused of causing the death of her brother-in-law’s child. Dulloo, however, survived the ordeal and all charges against her were dropped. She then received a new sari and sweetmeats as a reward. Out of the cases recorded in the Mandi Report, this is the only one in which the would-be witch was declared innocent. Since witch-swinging was illegal, the men responsible were tried in the court, but no one was convicted.

The next year, three women from the nearby village of Katie Dour were accused of witchcraft. All three were swung for a week, declared guilty and forced to leave the village. The women decided to appeal to the British court for justice and managed to get compensation of Rs200, which helped them to settle in another village.

Apart from this case and Dulloo’s, every instance of witch-swinging detailed in the Mandi Report ended in the death of the accused woman or women. One possible reason why these three had survived was that they were all young (as was Dulloo), in their early 20s. Most women accused of being witches were elderly widows. Given their age and bodily infirmity, they were unable to survive the trauma of witch-swinging.

Another common characteristic of the “witches” was that they were economically independent. Even today, most women accused of witchcraft are usually independent and have considerable wealth. Archana Mishra in her book, Casting the Evil Eye: Witch Trials in Tribal India, highlights that property disputes, inheritance and other financial matters are often resolved by falsely accusing the woman of practising witchcraft.

Like all archival records, the British records are biased. A pinch of salt would be prudent. Nonetheless, these stories need to be told, especially because they involved intricate legal processes.

Significantly, the British had not banned the practice of witchcraft, but prohibited witch-finding. The intention behind this was to protect women, and we know of at least three (the ones from Katie Dour) who used this to their advantage.

The Mandi Report helps bridge the gap between religious knowledge and actual practice over the years in India, and provides a backdrop to understanding current sorcery practices. Indeed, archival records play a critical role in removing the fanciful aspect from witchcraft, help us comprehend the seriousness of it and lay the foundation for the growth of more complex historical narratives. #KhabarLive