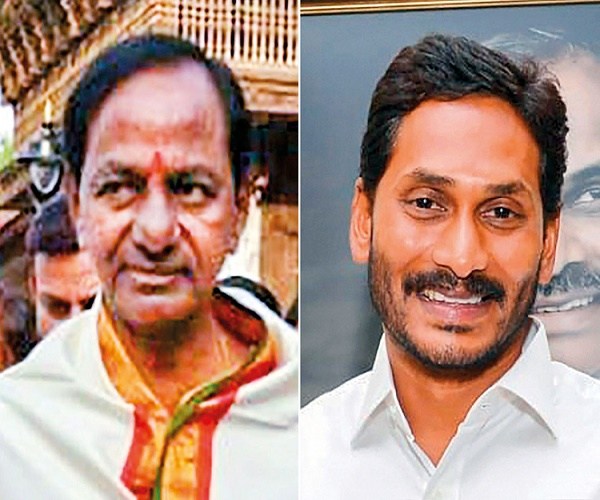 As India waits for May 23 to know the outcome of the Parliamentary elections, all eyes were riveted on the Telugu states of Telangana and Andhra Pradesh which has 42 Lok Sabha seats.

While Telangana Chief Minister K Chandrasekhar Rao, a strong votary of Federal Front of regional parties was already exploring the possibilities of working with Congress in the formation of the next government at the Centre, Congress itself has started making moves to woo YS Jaganmohan Reddy of YSR Congress in neighbouring Andhra Pradesh.

Even as KCR was in Tamil Nadu on a pilgrimage-cum-holiday trip and was also trying to meet the DMK chief MK Stalin to explore various options, including working with Congress, Congress leadership has established initial contacts with the YSR Congress.

This marks a peculiar turn to the political situation in the two Telugu states as all the regional players who were bitterly opposed to each other were likely to be part of the same political combine at the national level in the eventuality the NDA does not get a majority.

KCR, who had a bitter fight with the Congress in Telangana till recently and had gone all out to decimate the political rival by attracting more than half of Congress legislators, was now sending feelers that he was ready to support a Congress led coalition at the Centre after May 23.

ALSO READ:  Tomatoes Crop Left To Rot In Fields Of Mahbubabad In Telangana

At the same time he was also keeping his options of building a Federal Front along with other regional parties open just in case the results throw up such a possibility.

KCR, who set the ball rolling by meeting the Kerala Chief Minister and senior CPIM leader Pinarayi Vijayan and talking to the Karnatkaa Chief Minister H D Kumaraswamy over phone earlier this week was now going around Tamil Nadu. He spent Thursday and Friday in Rameshwaram visiting the grave of former President APJ Abdul Kalam offered prayers at the famous temple at the coastal city. Accompanied by his family members as well as other leaders of TRS he also visited the famous places like Dhanushkodi and Rama Setu.

Party sources said that he was waiting for the confirmation of appointment with the DMK leader Stalin to discuss the emerging political situation in the country. As Stalin expressed his inability to meet KCR on May 13 as he will be busy campaigning for the assembly by elections, TRS leaders have suggested advancing the meeting to Sunday. However the DMK was yet to confirm the appointment.

According to the TRS sources, as KCR already indicated to HD Kumaraswamy of his readiness to work with Congress, his discussion with Stalin will also be on the same lines. While Kumaraswamy was part of an alliance with the Congress and Stalin already declared his support to Rahul Gandhi as future Prime Minister, KCR may seek their support in building broken bridges with the Congress.

This is in contrast to KCR’s earlier stand that only a front of regional parties will be able to form the next government in New Delhi as neither BJP nor the Congress will secure the majority. Sources said that KCR was forced to change his tune as not many regional satraps were in favour of keeping Congress out of their plans.

However the Telangana Congress leaders were not very happy over such a prospect as KCR had not left any stone unturned in wiping out their party in the state through unfair means.

Since the assembly election in December last, TRS has already snatched away 12 MLAs from Congress and the Congress leaders were forced to watch helplessly.

In this context it remains to be seen how Congress’ central leadership responds to the feelers of KCR.

While Congress evinced interest in meeting the YSRCP leaders for talks, YSRCP leaders have responded that any such meeting before the results will be premature. “We want to wait till the results are declared. Talks will be possible only after knowing the numbers”, a senior party leader said.

Jaganmohan Reddy has already declared that he will be willing to support any government at the Centre which grants special category status to Andhra Pradesh.

Establishing a friendly rapport with Jaganmohan Reddy will be a tough task for Congress as he had a bitter break-up up with Congress following his father YS Rajasekhar Reddy’s death in a helicopter crash in September 2009 and Congress had refused to make him his successor.

But what complicates the matter that Telugu Desam was already in pact with the Congress and N Chandrababu Naidu was actively canvassing support for Rahul Gandhi as the next Prime Minister.

Million-dollar question was whether two bitter rivals — TDP and YSRCP- will support the same alliance at the Centre. #KhabarLive