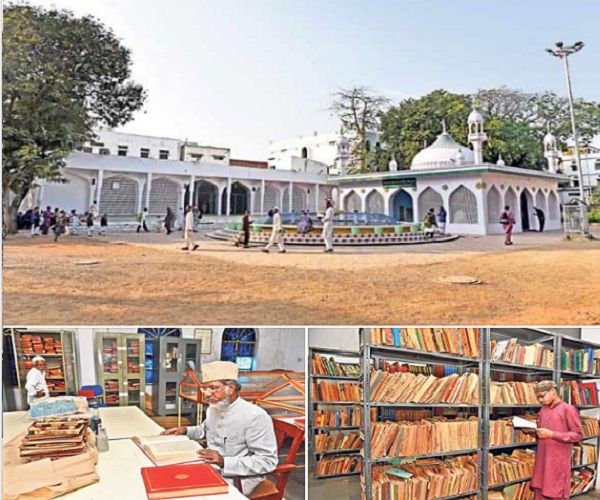 The Shibli Ganj of the Hussaini Alam locality is not like any other area in Hyderabad. It has the rare reputation of being home to the 146-year-old Islamic seminary, the Jamia Nizamia. The famous Islamic seminary is equated with well-known universities across the world for its quality education. It was established by Moulana Hafiz Mohammed Anwarullah Farooqui Fazeelath Jung bestowed with the title of Hazrat Shaykh ul Islam in 1872 CE (1292 Hijri year of the Islamic calendar).

Hazrat Shaykh-ul-Islam was a tutor for the Nizam VI, Mahboob Ali Khan, and Nizam VII, Mir Osman Ali Khan. He had held many posts, including administrative post in the Nizam government. This apart, his contribution to the spread of Islamic education won him many laurels across the globe. In 1308 Hijri, he had also founded the ‘Dairatul Maarif’ institutions where centuries’ old manuscripts got published after verification and correction.

Around 1,000 students study in various levels at the institution which offers courses from primary basic to PhD level in different streams of the Islamic education. The groups are split into primary, secondary and higher education. It takes about 17 years of education to pass with a PhD degree from the university. Founded in 1872, the Jamia Nizamia in Hyderabad is one of the prominent Islamic seminaries on a par with world-renowned universities.

The syllabus comprises various topics like Islamic jurisprudence, Arabic prose and poetry, Philosophy, Rhetoric biography of Prophet Mohammed, English, Arabic, Urdu literature and languages. This is apart from the basic courses for beginners and middle-level students.

Admission process
“Students from across the country enrol for the courses offered by the university. Admission is through entrance test and those with necessary qualification are enrolled for higher courses. Foreign students of various countries enrol for external courses (distance) and appear for the examination,” said Ubaidullah Faheem, superintendent and head of publications division.

The number of affiliated madaris (Islamic schools) with Jamia Nizamia is 165 across the country. It includes full-time as well as part-time madaris. These are the basic course schools and for higher education, students enrol at the Jamia Nizamia.

The students who passed out of the institution are working in various Islamic institutions, universities and IT companies across the world, including United States, Europe, Indonesia, Australia, Middle East and other parts of the world on various positions.

Of late, the university has introduced English language. The notice board in the corridor speaks about the seriousness of the institution in imparting English language to its students. A notice put up reads: “Topics for Elocution competition in English language”. The note further states Fazil Group – Compatibility of Muslim Personal Law with Human nature and Aalim Group – Islamic Concept of Tijarah and propagation of Islam.

A State-funded two-storied auditorium is being constructed at a cost of Rs 14.60 crore. With a seating capacity of 1,000 people, the auditorium, to be inaugurated soon by Chief Minister K Chandrashekar Rao, will help the Jamia to organise big religious programmes and university-related events.

Guidance of Fatwa council
Darul Ifta – Fatwa council is part of the Jamia Nizamia since 1910. The council guides the Muslims on religious and juristic issues and the ‘fatwa’ –legal pronouncements – issued by the council are accepted and honoured by all the courts in the country.

What is a fatwa?
Fatwas are to be issued only by leading Islamic scholars because the ruling or opinion given is to be arrived at through deep understanding and thorough knowledge of the Shari’a, drawing on the sources of Islamic law, namely the Qur’an and the Sunnah of the Prophet.

“The fatwas are issued only after being certified by a team of mufti of institution. Generally, the fatwa is signed by experts, including the head mufti,” said Mohammed Azeemuddin, the head Mufti of Darul Ifta. He added that the fatwa is issued based on the question asked to the council in accordance with Sharia and Quran.

Every year, a few thousand fatwas are issued on the ‘letter head’ of Darul Ifta while in other cases people obtain unofficial fatwa on paper, over telephone, post and emails. “On an average, we have 50 persons visiting us every day in person and equal number over phone and email. The needy obtain the fatwa to resolve their issues and conflict on various subjects, including partition of property, marriage, business, religious beliefs and practices, food consumption and, sometimes, social practices and customs,” he explained. Queries are answered at “fatwa@jamianizamia.org”.

The government agencies, including the police department, approach the Darul Ifta to seek opinion on various issues relating to criminal disputes reported at the police stations, said the head mufti.

A few of the fatwas issued by the seminar were against impersonation of voters, avoiding extravaganza during Milad-un-Nabi celebrations, against late night marriage and baraat nuisance, food habits and items among others.

The council has, so far, published 70 books on the fatwa it issued since its inception. The first head mufti was Mohd Ruknuddin.

Library’s eclectic collection
The Jamia Nizamia library stands out for its exotic collection of books. With over a lakh books in various languages, including Telugu, English, Arabic, Persian, Bengali and Urdu, these were the prized collection of the founder Hazrat Shaykh-ul-Islam. As years passed, more books were sourced and housed at the library to help researchers who pour in from various parts of the globe. There are about 3,000 manuscripts in the library rewritten by eminent scholars.

The highlight of the collection is the nearly 400-year-old The Mahabharata running into 5,000-odd pages. “It is from the personal collection of the founder of Jamia Nizamia. Abu’l Fazal, who was one of the ‘navratnas’ of the court of Mughal emperor Akbar had translated it from Sanskrit to Persian language,” says Fasihuddin Nizami, the librarian.

The collection also has Padmaavat – a 216-page book said to be a copy of Malik Muhammad Jayasi’s epic poem on which the controversial movie Padmaavat is based. The book was copied in 1823 and no one knows how it reached the library.

He explains that scholars and students of comparative religion from different parts of the world visit to study the Persian translation of the Hindu epic.

There is also a Quran, whose first two pages are gold plated. The translation of the Quran kept here are in various languages, including Bengali, French, Indonesian, Arabic, and Telugu, among others.

The library attracts students of all faiths for their research-related activity from Japan, Palestine, Middle East, Indonesia, European countries, Canada and other countries.

The oldest manuscript here is a copy of Kitab-ul-Tabsera Fil Qiratil Ashara, authored by eminent Islamic scholar Abu Mohammed Makki bin Talib. This 750-year-old book is about reading Quran with the art of ‘tajweed’. “There are only two copies of this masterpiece in the world. The other is preserved at the Ottoman Library in Turkey,” says the librarian.