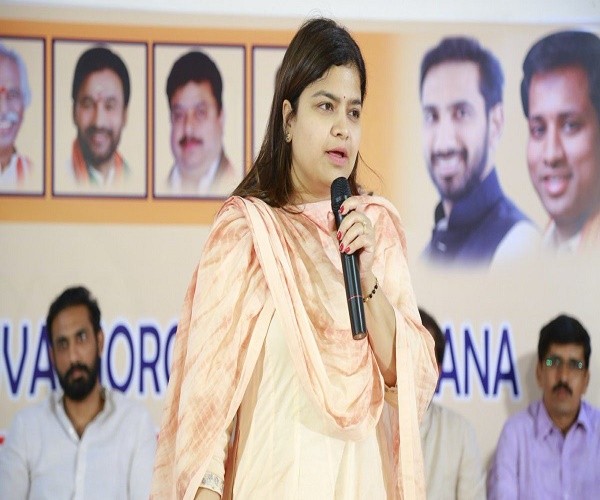 In a bid to gain a stronger foothold in the southern state, the BJYM will hold the three-day maha-adhiveshan between 26-28 October in Hyderabad. Bharatiya Janata Yuva Morcha, the youth wing of the BJP, will hold its maha-adhiveshan (mega convention), its last of the Narendra Modi government’s current term, in the poll-bound state of Telangana.

Shifting its focus from the north and central states going to the polls in November and December to the south, BJP chief Amit Shah has asked leaders to ensure maximum participation of youth in its ‘yuva maha-adhiveshan’, which will be held at Hyderabad’s Parade Ground on 26-27-28 October.

BJYM president Poonam Mahajan tweeted about the decision and invited the youth to start registering for the convention.

Inaugurated the @BJYM control room for our upcoming Yuva Maha Adhiveshan between the 26th and 28th of October. pic.twitter.com/FDC5Ixes4P

The Telangana assembly was dissolved for early polls by chief minister K. Chandrashekar Rao in September.

The decision to organise the convention in Hyderabad was purely political, party sources confirmed.

The BJP is trying to find a bigger foothold in the state, whose inaugural assembly in 2014 featured five of its MLAs. The BJP also has one MP from Telangana in the Lok Sabha.

By attracting the youth, the BJP has shown that its focus will be on wooing first-time and younger voters.

A senior BJP leader told ThePrint: “We no longer are allies with TDP and not have worked out any alliances. Amit Shah has made it clear that we will go to the polls alone.

“We are struggling to find our ground in Andhra Pradesh after the split with the TDP. A better performance in Telangana would surely boost the cadre in neighbouring Andhra. Plus, a few more seats in the Lok Sabha will help us in long run, if by then we find our acceptance increasing.”

The maha-adhiveshan is expected to be attended by at least 15 central ministers and 10 chief ministers of BJP-ruled states, said Bharath Goud, the Telangana unit president of the BJYM.

This would be on the lines of the Gujarat elections in 2017, where the party launched its campaign by sending 30 ministers to the state on the same day.

Party chief Shah is expected to lead this list of invitees.

Preparations began immediately after the BJYM’s national executive got over on 12 October. Led by BJP general secretary P. Muralidhar Rao and BJYM president Mahajan, the representatives delved into the first-time voters outreach program.

As per Goud, there are thousands of first-time voters under the age of 30 in the state who have registered themselves as BJYM members and will participate in the event.

“The event is stipulated to be attended by 50,000 BJYM volunteers who will work to spread the Modi government’s achievements and schemes to every household in the run-up to the election. This meet is crucial,” said Goud. #KhabarLive