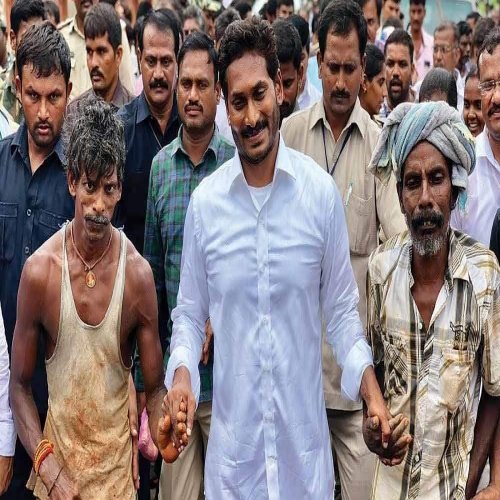 He came, he saw and he conquered with determination. Within a year of his becoming chief minister youthful, no – nonsense and straight foreward YS Jagan Mohan Reddy became an emblem of pro – poor governance reforms aimed at meeting their aspirations of the people.

His steeliness of conviction and dedication, the chief minister launched number of schemes like introduction of english media in government schools, applying Arogya Sri Scheme to all people below annual income of Rupees 5 lakhs, the unique village secretariat setup, the Vidhya Devana, Rythu Bharosa and number of other schemes. All these schemes were evolved by Chief Minister on the basis of his findings of the needs and necessities of the people during his gruelling 3600-km long marathon padayatra before the 2019 Assembly election.

Jagan trusted people and people in turn adored him by giving him a land slide victory in the assembly elections.YSRCP led by Jagan Mohan Reddy secured 151 out of 175 seats in Assembly and 22 out of 25 seats in Parliament. Though many educationists advocate Telugu as medium of instruction to facilitate children sucessfully pursue their studies , Jagan took into account the demands of numerous parents for starting English medium in government schools, to relieve them from the burden of paying hefty amounts as fees for their children in corporate english medium schools.

Jagan fervently believe that as any great society can be built in the class rooms , our society will not to be great until every young child will feel assured that poverty is not a bar to learning, must offer an escape from poverty. The Andhra Pradesh High Court struck down the GO relating to introduction of English medium up to primary level in govt schools. The HC quoted number of authorities , education commissions and Mahatma Gandhi in support of mother tongue being the medium of instruction till secondary stage of education.

But in the same Young India journal published in 1921 Gandhi frankly admitted that English has usurped the dearest place in our hearts. After the entry of corporate English medium schools more than four decades back many parents with low incomes have also started sending their children for those schools by paying large amounts as fees.

This was the time when several rich and middle- class educated youth started going to USA and other countries to earn good incomes. As years passed even the educated youth of poor families started entertaining dreams of going to America and other countries. Then they realised that unless they study in English medium their scoring good marks in TOEFL & GRE will not be easy . Added to this several corporates started English medium schools not only in major cities and towns but also in rural areas this has adverserly affected enrollement in government run telugu medium schools .

In view of all this Jagan decided to introduce English medium in government primary schools to help the poor parents. Jagan also decided to give Rupees 15000 to the mother of each school going child.Not only this, the government is also giving three sets of uniforms, gloves socks and a school bag and books to every child.

ALSO READ:  What Would Cricket Star Dhoni Have Done For IPL 2018?

Despite HC’s strong views on having Telugu as medium of instruction in government schools many survey reports of USAID, World Bank revealed that most kids in fourth grade of primary schools cannot read even their mother tongue. Such children with learning issues were no exception as they make up half of school going population in the country.

In January this year a government teacher of Bellary was suspended for posting a video online for Class 2 student struggling with a single word – “pakkalebu” meaning ribs. Over three minutes the boy grapples with breaking up the word and stringing along the syllables while the teacher taunts him and beats him with a stick.

According to data from 2018 survey released recently by USAID, oral reading fluency in the mother tongue in class 2 is zero for 76 per cent for the students in Uttar Pradesh, 69 per cent in Rajasthan and 53 per cent in Karnataka. A zero oral reading fluency score indicates the child is not able to do any of these translate letters into sounds and sounds into words , make the connections , relate the words and meaning or intuit and fill in the blanks.

These findings were supported by the government’s own National Acheivements Survey (NAS), Pratham’s Annual Status Education Report and recent World Bank report which have pointed a serious learning crisis in the government schools in the country. Their conclusion around 50 percent of children lack basic literacy and numeracy skills despite spending 5 years in the school.

The World Bank report said nearly 55 per cent of 10- year- olds are unable to read and understand a simple text without basic proficiency , hence 97 percent school enrollment and robust attendance statistics would be meaningless . These surveys have clearly shown that even when the mother tongue is the medium of instruction majority of students are not able to grasp the language.

As English medium will empower students to appear for several entrance and competitive examinations like CAT ,NEET etc..Jagan introduced English medium in government schools. In doing this he has shrugged off all the malicious mudslinging spread by his political opponents. He has infused fresh ideas into the making of village secretariat all things relating to government will be attended to at the village level .

Under YSR Raitu Bharosa scheme he is giving each farmer Rs 13,500 as input subsidy. Over 10,641 Raitu Bharosa Kendras will be opened to be the backbone of agriculture he is also ensuring supply of quality seeds , fertilizers and pesticides. Under Jagananna Vidhya Devana all college-going students will be given fees reimbursement. Under Jagananna Vasathi Deevena every mother of college going student will be given Rupees 20000in two installments annually.

Many of these schemes introduced by the Jagan government are aimed at protecting the poor from becoming poorer and creating a path way to scaling up. In fact there will be no more halted lives and postponed futures for the people of Andhra Pradesh. #KhabarLive #hydnews